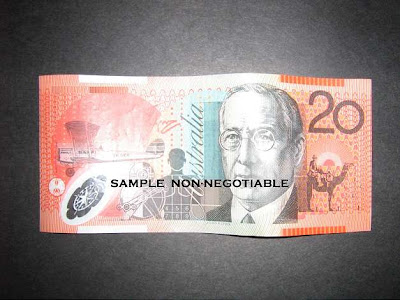 Yesterday Clare and I went shopping for baby stuff at the Greensborough Shopping Centre. Nice place, maybe a little bit of an overload for people like us who have gotten used to having only one or two brands to choose from rather than 20, but hey, we're adapting.


So there we were, sort of window shopping in this mall when all of a sudden I heard somebody call my name. I turned around and saw one of our fellow missionaries from Ukarumpa! He and his wife had left a few months ago on a combination furlough/have a baby trip and I had completely forgotten that they were in Melbourne. So we had a good chat with them and got all caught up on their news and them on ours, you know how it goes.


Anyway, as often happens when missionaries bump into each other in some other place, the question came up, "So when are you guys planning to go back to PNG?" At that question, our friend's face clouded over and he said, "Well, we were planning to be back in January, but because of the sudden loss of strength of the Aussie Dollar, we now have to raise 30% more financial support in order for that to happen."


When we are in PNG, I often forget how far-reaching the effects of world financial troubles are. Sure, I notice that the price of supplies or spare parts from Australia or from the US is suddenly higher or lower than it was last month, but it isn't until I talk to somebody whose support is suddenly cut by 30% (through no fault of his own) that it really hits home.


So we're remembering our Australian missionary friends in prayer these days as they are all feeling the effects of the sudden devaluation of their currency. Over the last few years it's been the American missionaries who have been feeling the effects of the devaluation of the US Dollar, so we have some idea of what the Aussies are going through now. The value will probably come back up at some point, but when is anybody's guess.


In other news, we got the baby mittens we were looking for. I didn't know this, but apparently newborn babys need mittens to keep them from scratching their faces and hurting themselves. We also started investigating what is available (and what we think we might need) to childproof our house in Ukarumpa. I was in favor of building a padded room that we could just put the baby in, but I'm sure Clare wouldn't go for that. :)

Posted by Andrew the Mechanic at 11:55 AM