So Tony was out again, this time for a week while he gets training for another position that he'll be taking up in January.  Two big things happened while he was gone:

1.) The Kingston Bridge in Kainantu sustained heavy damage when a couple of big trucks loaded with green coffee beans crossed it.  As I understand it, the first truck crossed over and the bridge made alarming noises.  The second truck crossed over and 3 or 4 of the load bearing I-beams underneath the bridge (already very heavily rusted), snapped.  The third truck decided not to try his luck, he turned around and went back home.  This bridge is vitally important, not only to our organisation, but also to half-a dozen other organisations of national significance, which all happen to be located in the Aiyura Valley.  If this bridge goes down, then there is no really practicable way to get in and out of the valley, certainly not by road anyway.  So naturally representatives of some of these organisations all showed up the next morning to take a look at the bridge and decide what to do.  We took a trip to the Department of Public Works in Kainantu and asked if they had any of the parts needed to fix the bridge.  The best that we could find was a collection of 7 bent and rusty I-beams buried in somebody's garden near the Work Department!  So we took those back to our workshop and straightened them out.  Just after we had started straightening the first one:

2.) happened.  We got a call that one of our employees had been in a bad accident about 60 km away, and had rolled one of our rental fleet vehicles.  I feel I should explain at this point that we keep a small fleet of vehicles, 2 four door Ford Ranger pick-up trucks, 2 or 3 Toyota Hiace vans/busses, and a Toyota Land Cruiser SUV for use by members and employees of our organisation.  This cuts down on the number of people who feel that they need to own cars and thus lightens our workshop work load somewhat.  Well, Evan and I loaded up the rescue truck, (a well-worn Toyota Land Cruiser pick-up truck/ute) and the crash trailer and headed out again.  Here's what we found: 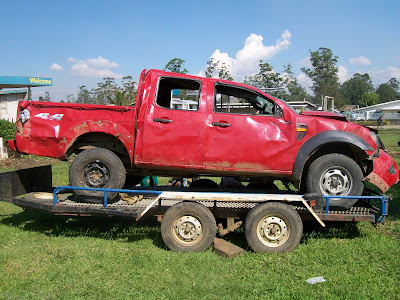 It's too bad!  That was a sweet little truck.  Only 33,000 km on it.  (For those of you scratching your heads and saying "That don't look like no Ford Ranger!" You're right!  I don't think Rangers like this one have ever been available in the US, and probably not the UK either, though I'm less certain about that.  It has a 12 valve, 4 cylinder turbo-diesel in it--with factory intercooler, 5 speed manual trans, and a limited slip diff in the rear end.  Good stuff.)  It does actually still run, in fact we drove it up on to the trailer, though we had to change one of the front wheels first as one of the tires had popped off of the rim.

It's a bit hard to say what happened, let's just call it "driver fatigue".  He and his two passengers walked away with minor bruises, (proving that it IS still possible to survive a major accident in a car without air bags--who knew?!) .  One of the passengers claims that the car rolled 3 times, I'm just not sure.  I'm pretty sure it's totalled, though we're still waiting for the insurance company to tell us so.

We got the initial call around 3:30 p.m. and didn't get back until midnight.  It was no picnic driving up the Kassam Pass with that truck and trailer dragging us down, let me tell you.  At one point we actually ran out of steam and stalled on an unpaved section and the weight of the trailer and wreck started to pull us backwards--a passing police officer hollered for us to bail out, but I got it into 4x4 low range and managed to get under weigh again.  Needless to say, I left it 4x4 low all the way to the top of the Pass after that, even though it meant that the drive train wound up and popped alarmingly every now and then.  I suppose I could have unlocked the front hubs, but I think the extra pulling traction was probably an asset.  We only had to go 60 km from home, but on the way back we were averaging about 15 kph, uphill and down, as the Land Cruiser brakes aren't quite up to the task of handling the extra 2.5-3 tons of weight that we were towing.  (Good news is that as a result of this trip, we're now looking into maybe getting a better truck to use for the rescue vehicle!  We were already starting to look into it, but this has made us even MORE interested in replacing it.)

Anyway, we made it back alive, then had to leave the wreck and trailer with some friends in Kainantu because there was a big hole in the Kingston Bridge and we didn't want to try to get the trailer over it.

For the next couple of days, the Kingston Bridge was Priority One, and so we sent out a crew of guys to work with the Department of Works to replace the broken I-beams in the bridge, some of which were so rusty that they fell apart under their own weight when we removed them.

For all of the work we did on it, the bridge is still falling down because the bank on one end is washing away, so this was only a temporary fix.  While it was being repaired, we saw people from the Department of Works surveying the site in preparation for a new bridge, though a lot of work needs to be done to repair the bank before construction can begin.

But for now, the Bridge is open and even the big holes that were in it for years are fixed now!
Posted by Andrew the Mechanic at 8:52 PM No comments: