And Then There Was One


So!  Last month the Grahams left PNG for the last time.  Well, maybe not the last time, who can say if they may not come back to visit some time?  But they sold their house, sold their beat-up old Toyota Hilux, packed up whatever they wanted to keep and shipped it back to the US.

So who were they?  They were translators here in PNG, and God blessed their efforts to translate the Bible into one of the languages of PNG.  It was a long, hard slog and though it ends well, their PNG story has more than its fair share of heartbreak in it, especially in the early years.

But who were they to me?  Aside from being my neighbors here in Ukarumpa, (they lived just a few doors away) they were also at my POC.  Not as fellow students, but as staff members.  In 2002 they were on staff at the Pacific Orientation Course, the place where I learned so much about Melanesian culture and where I learned Melanesian Pidgin during my first 15 weeks in country. 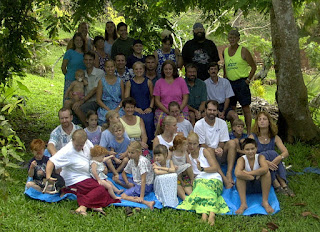 The students (and some of the staff members) of the February 2002 Pacific Orientation Course.  All gone now, except for the hairy guy in the back row.

I'm sure the Grahams had their doubts about my long term PNG survival; although I was quick to pick up the language, I struggled a bit with other things.  Melanesian culture is all about relationships, and I've always been a fiercely independent sort of guy.  I'll admit it, some aspects of the culture are hard for me.  The Grahams were always kind and gracious to me at POC, no matter what doubts they may (or may not) have had. 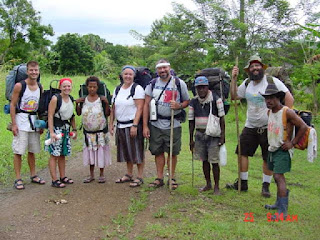 Heading out on a three day hike during my POC training.  I was elected as "hike leader" which in itself was a valuable learning experience! 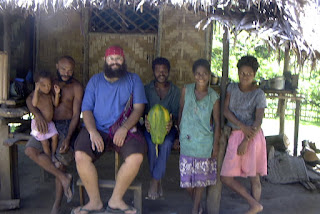 As part of my language and culture training, I lived with this family in their village in Madang Province for 5 weeks.

Each POC group is different.  Some groups really "gel" and become close friends for the rest of their careers in PNG; others, not so much.  My own POC group never got super close--after POC I think we got together one time for a picnic and that was pretty much it.  We didn't hate each other, we just all spread out to different areas and moved in different circles.  Still, we had all been through POC together and though we may not have made much of that fact, it was still a fact.

As the years piled up behind us, various people left for various reasons.  The couple who had been the directors of our POC retired, some of my fellow students ended up moving on to other countries, others left for personal or health reasons, and some of them stayed until they felt called to leave.  There are lots of reasons why people leave.

Eventually only the Grahams were left from the staff of the February 2002 POC, and only myself and the Scott family were left of the students.  Then the Scotts left, and it was just me and the Grahams, last survivors of that particular session of POC.

And now the Grahams are gone, too, and, to quote Job's servants, "I alone have escaped to tell you about it."

16 years ago (almot 17 now!) I never would have guessed that I would be the last member of that group to still be here.  God has been good to me, he has provided for all of my needs here and so much more.  Certainly "more than I could ask or imagine".

Posted by Andrew the Mechanic at 12:12 AM No comments: