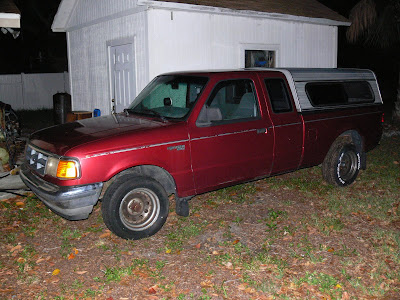 So! Strider the Ranger is alive and kicking and better than ever. Well, at least better than he has been since I first met him in 2006. I got the new transmission installed, put the exhaust all back together, put new fuel in the tank, brought the tires back up to the proper pressure, etc. and took him for a spin to Wal-Mart and back, (I didn't dare drive any farther because my registration expired 3.5 years ago).

Anyway, Strider lives, but is still too small for our family. So I will probably end up selling him, but probably not until we come back to the US in the fall. Dad had a nice aluminum cap from back when he had a Ranger and so I put that on the back of Strider, thinking maybe the cap might boost his value a bit on the used car market. I really liked this truck. I admit that at first I wasn't too thrilled about the small wheels, but at one point I experimentally put a set of tall tires on there, (ones that came from the old police car I junked out back in 2006), and they felt really scary to me because I was used to the better acceleration of the smaller ones, so I switched back. I do like the offset better than the stock rims. They are wide. Wide enough that I think that they might be messing with the front 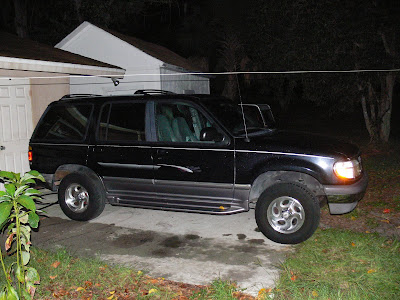 So now meet the New Guy. New Guy is a 1996 Ford Explorer 4x4. Originally a top spec Explorer, New Guy is showing a few signs of wear and tear, but appears to be a basically sound old car. Certainly better than the other similarly priced Explorer we looked at, which was only a 2 wheel drive and which had a "CHECK ENGINE" light that stayed on all the time. New Guy has lots of things that normal people care about, like power windows and door locks and ABS, air conditioning and dual front air bags. Things that I quite literally couldn't care less about, but there you have it, it's hard to get simple cars anymore! I do like the sunroof, though.

You might be wondering why I chose to get a 4x4 SUV. Well, we were originally looking for an RV, simply because an RV would allow us to live life more or less normally while travelling. I realised one day while driving here in FL with a very gumpy toddler screaming in the back seat that travelling with kids could well end up being very difficult, so I was hoping to find a cheap RV that would allow Clare and the kids to live life in the back, watching TV, eating snacks, etc. while I got on with the business of driving us from FL to MI and back again. Unfortunately, most of the RV that we looked at in our price range, ($1,000-$2500, and there were a surprising number in that range), were in pretty rough shape. All of them were advertised as "running" and yet, none of the owners were able to get them started, mainly because nobody wanted to spend the money on a new battery to get them started. So, because I didn't have time to do a lot of fixing up on an RV, I reluctantly let them all go and decided to get an Explorer instead.

Why an Explorer and not a Blazer or a a similar Japanese car? Well, I do all my own work on our cars and I'm most familiar with Fords and Very Olde Land Rovers. I was impressed with the Ranger (Strider) that I drove all over the East Coast in 2006, so I decided to get something of similar vintage and technology so that I wouldn't have to spend a lot of time learning how to work on it. Besides, Explorers are well supported in the aftermarket.

While I did not initially go out looking for a 4x4, I was happy when this one came up for sale, as we'll be doing a lot of driving over the winter and some of that in places where having 4x4 in the winter is a good thing, (like TN, for example).

Haven't decided on a name for New Guy yet. Clare says that all the baddies on TV drive black SUV's. I told her that we can drive around pretending to be baddies.
Posted by Andrew the Mechanic at 12:10 PM No comments: 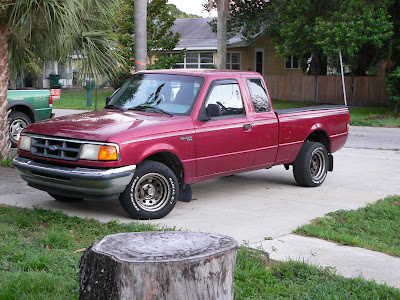 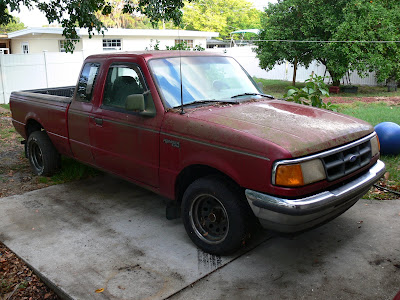 So what's a little mold and a few cobwebs?! New tranny and a visit to the carwash and he'll be good as new. Of course, this car really isn't very useful for a family with a toddler and an infant on the way, so we'll probably put it up for sale in a few weeks, or maybe try to trade it for an Explorer or something.
Posted by Andrew the Mechanic at 9:19 AM 1 comment: 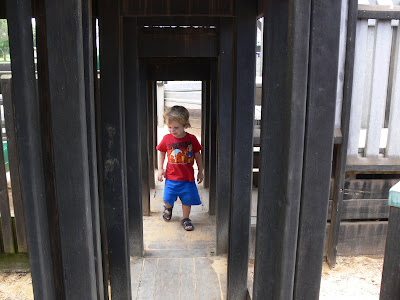 Because Maui was such a photogenic place, (and because blogging is so EASY from the US), I decided to put up a few more photos from our time there. Above is Levi at his favorite place in Maui, a huge playground called Giggle Hill.

Below is Clare and Levi and our friend Rebecca (who lives in Maui and who we stayed with while we were there--thanks Rebecca!). Also Some Dude (holding the masculine pink flotation device) who wouldn't get out of the shot. 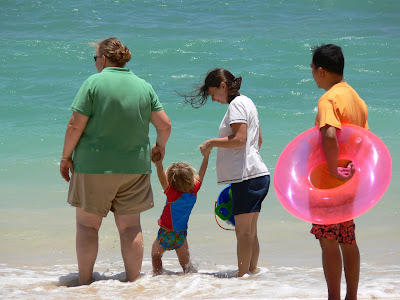 Wind surfers at Kanaha Beach. There were dozens of wind and kite surfers there that day: 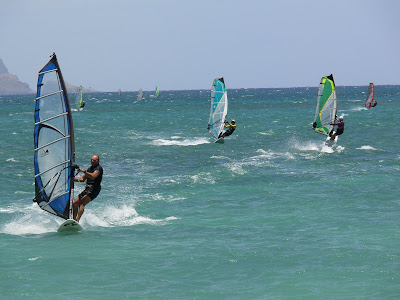 It was really windy at Ho'okipa Beach when we went there: 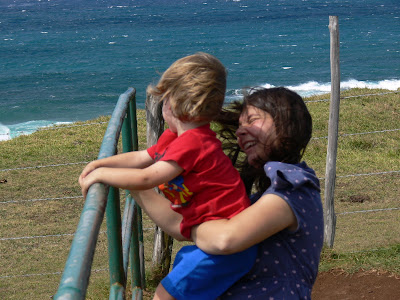 More later....
Posted by Andrew the Mechanic at 2:04 AM No comments:

For those of you who have been following our travels, we have now finally made it safely to Florida. Yes, after 7 different airplanes in 10 days, we've finally made it. My parents were there ot meet us at the airport in orlando and from there they drove us across the state to where they live. It's great to see them again, and of course they are ecstatic to see Levi (their only grandchild at this point), and he is also thrilled to see them!

It's normal for people returning to the US from a developing nation to experience some culture shock, and we are all going through a little of that. Here's some of the things that have been a little bit of a culture shock to me--funny things mostly:

--I feel like there is waaaay too much packaging on everything.
--TV is full of more inane idiots than ever.
--Just being here turns on a materialism switch in my brain; I caught myself looking at $400 watches on the web today. I think looking at $20,000 watches in the airline catalogs was probably part of what made me willing to look at stuff in the $350-$400 range. Yeah, I'm pretty sure that won't happen! LOL!
--The highways are super clean, they look almost sterile.
--Americans are just so incredibly FRIENDLY! It takes a little getting used to. I keep having to remind myself that they aren't doing it because they want something from me, it's just the way they are.

Some changes I have seen: big signs in airports, warning you not to take photos. I have seen this before, but never in the US, only in countries, where the government went overboard to protect little things like military trucks or helicopters, stuff that would be easy to get info on from a thousand other sources.