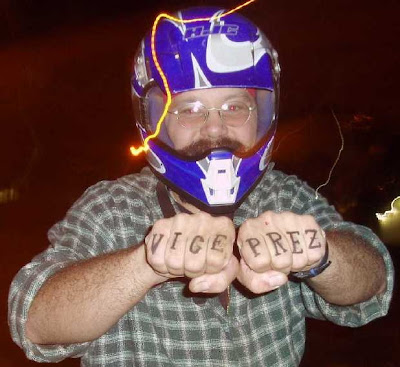 Ah, the Midnight Motorcycle Ride! Every year, on New Year's Eve, Ukarumpa motorcycle riders get together for a 45 minute ride around Ukarumpa starting at 11:30 and going to 12:15. The tradition of missionary kids riding motorcycles around Ukarumpa has waxed and waned over the years, but for the past 9 or 10 years it has been a consistent annual event. We close down public access to the roads in Ukarumpa so as to cut down on the amount of potential traffic. We make an effort to make the ride as safe as possible for both the riders and the spectators, as many people will line the roads in some areas to see us ride by as midnight approaches.

Over the last 2 or three years the Ride has been organised by me on my own, but for the first several years that I was here, I organised it as a part of my role as the Vice President of the Ukarumpa Motorcycle Club, which is a club that was created to help organise the shool-aged bike riders. Today's photo is from a few years ago when I was still the Vice Prez. Some of the kids really look forward to the Midnight Ride and will spend the last few days of December in a flurry of activity trying to get their working bikes ready and trying to resurrect as many "dead" bikes as possible in time for the ride so that as many people as possible can participate.

This year's ride was really dry and dusty, some years we have had rain and mud the whole time, other times we have fog, and sometimes the weather is clear and the roads are perfect. Participation varies from year to year, this year we had about 10 guys at the start with another 4 or 5 joining in later, some years we have had as many as 25 or 30, with mix of vehicles including little dirt bikes, big dirt bikes, old race bikes, 3 wheelers, 4 wheelers, a golf cart, and this year included a chinese made, 3 wheeled light duty truck at the beginning.

If you come to PNG and end up living in Ukarumpa, you too can become a part of the tradition. It's fun, it gives the kids a chance to do something they ordinarily can't, (this is the only time of the year that unregisterable bikes--like old race bikes--are allowed on the roads), and it's a fun way to ring in the new year.