“Clare?” I hollered over my shoulder, “Fridge!” It was pretty much routine now.
“I'm ready!” she called from somewhere in the dark far behind me.
The kids were all sleeping, the thundering of the mighty 454 V8 next to me slowed as I lifted my foot off the throttle and gently applied the brakes. Carefully, I eased into the curve.

So we're on furlough now. I know, it's supposed to be called “secondment return period” or “home assignment” or something like that these days, but in my mind, it's still just “furlough”.  Like so many things in life, it's good and it's bad.  Good to see family and friends, good to experience so many of the freedoms we have in the US and the UK, bad because it involves incessant traveling and doing that part of my job that I am least confident about my ability to do well, that is speaking in churches.

We have in the past often dreamed about how nice it might be to have a motorhome for our travels in the US. New motorhomes are well beyond out price range, but hey, I'm a mechanic, how hard could it be to pick up an old one and fix it up? Right?

So we decided to do an experiment. I started looking through craigslist ads in the area where my parents live and asked them to look at several of the more promising ones. We set ourselves a limit of $5000. We eventually ended up with a 1988 Coachmen Catalina for $4000. It's 31 feet long and, somewhat remarkably, had only a little over 25,000 miles on it. Also the roof had recently been sealed with a quality sealant. 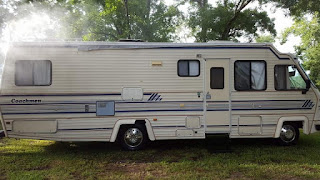 Normally, when I buy a used car, the first thing I do is put new tires on it. I know how important good quality tires can be for safety, but in this case the previous owner assured us that it had new tires on the rear. So we decided to get new ones only for the front. As they were kind of an odd size, we ordered them online. While waiting for them to arrive, I discovered that the previous owner had not been perfectly honest about the condition of the rear tires—they were old, and out of 4 tires, 3 different manufacturers were represented. One of then looked like it had good tread on it, but it was the lowest quality one of the bunch. In fact, an identical one that had been on the front had gone flat while the previous owner was driving the motor home to my parents' house. And another one, also flat, was found on the spare wheel.

We also discovered that the generator was not working, though it looked like it could be repaired. Since we were planning to be in Waxhaw, North Carolina on the 21st, I had the new rear tires and the parts to repair the generator shipped there.

And then something happened. When the new front tires arrived, there was only one of them. The other was supposed to show up in a couple days, maybe. Anyway, we ended up with an extra week in Florida waiting for it to arrive, much to the delight of my parents!

Since we had time to kill, Dad and I did some work on the brakes, on the lights, and on various other things that needed attention. Eventually the missing tire arrived and we had it installed.

Was it all ready to go? Not really. We had new tires on the front, the engine ran good, the transmission shifted properly, the brakes worked, the lights worked, it was good enough for the 600+ mile trip to Waxhaw. During my last test drive, the refrigerator tipped over when I went around a curve, but I put it back into place and made a mental note not to take corners too fast. As the dash board AC wasn't working and the roof AC wasn't usable on the road, we decided to travel at night. Night time would also mean cooler road temperatures, and I was hoping that would make life easier for the rear tires. I knew that if I could keep the tire temperatures down, that would maximise the chances of them lasting 600 miles.

So finally the day came. We spent much of the day loading up our stuff, (how have we ended up with so much stuff?), and at around 7 p.m. we headed out onto the road. It started to rain pretty heavily, which was fine with me as it kept road temperatures and ambient temperatures down. Travelling at night, raining, and keeping our speed down around 55-60 mph, I figured our rear tires just might make it.

The journey was not without it's little hassles. Every time we went around a right turn the fridge would tip over. (Clare and I worked out a system where I would call out “Clare! Fridge!” and she would rush over and brace herself against it to keep it from tipping.)  The cruise control didn't work. It was hot and the windows weren't really big enough to get a good breeze in, but the wind noise was pretty loud, loud enough to make conversation difficult without shouting. When it got really dark, we also discovered that none of the 12V interior lights were working, nor was the water pump for the sink, toilet and shower. On the plus side, the engine ran great, the temperature gauge never got hot, the oil pressure was perfect, the charging system was rock steady at around 13 volts. And driving in the rain had not revealed any leaks.
We made it out of Florida, then through a small part of Georgia that we had to cross. We crossed the border into South Carolina and I was feeling pretty confident. Only 150 miles to go. Once or twice I looked down and realised that I was edging up to 65 mph.

And then something else happened. A little after 3 a.m., a little north of Savannah, in the middle of nowhere, BANG! Clare was up in the front seat and yelled “What was that?!” “We've blown a tire!” I hollered back. We were in no immediate danger—there are 4 tires on the rear axle, so with one blown out we could continue rolling on 3. My greatest concern was that the remaining tire was now overloaded and might blow out in turn, or that pieces of the blown out tire might cause damage to the remaining good tire. I turned on my hazards (emergency flashers) and slowed down to 45 mph. Thankfully, we were only a mile from Exit 28, (Coosawatchie, South Carolina) so I decided to limp into there rather than try to put on the spare on the side of the road.

Exit 28 proved to be almost completely empty. I followed signs to the nearest gas station, which was also a small truck stop. I investigated the rear tires, and sure enough, one of the inside tires, (the low quality one that had the best tread) was blown out. No problem, I had a spare. Admittedly the spare was not in any better condition than the other rear tires had been when we set out, but...

So I got out the tools to change the tire. I wasn't real happy with the jack, but it was there, so I put it in place and started lifting the motor home off of the ground. It was extrememly hard to use and eventually, (before the wheels were lifted off of the ground), it broke. It was then that I took another look at it and realised that it wasn't a jack at all, it was a leveling jack, which was never intended to bear the full weight of the vehicle. I made a mental note to buy a good quality hydraulic jack as soon as I could.

Frustrated, tired, hot and absolutely drenched in sweat, (rivers of it were running down my nose!), I climbed back in to the driver's seat and moved the motor home into an empty parking spot next to a semi/lorry. Before we had left, a good friend of mine in Waxhaw had told me to call him if we had any trouble, so I asked Clare to give him a ring. It was around 3:30 in the morning.

Well, long story short we didn't get ahold of our friend until almost 8 a.m., and it took him a little while to get ready. We spent the time trying to catch up on sleep, (tricky to do with temperatures around 90F when you are not used to it and when you are covered in a mix of sweat, axle grease and South Carolina sand). I managed to doze a bit, and a little after 1p.m. he showed up. He had with him several jacks and other tools and parts. Together he and I got the spare tire on and then he followed up most of the way back to Waxhaw.

Posted by Andrew the Mechanic at 3:07 PM No comments: