Was it inevitable? Was it always bound to happen?

Okay, so if you're following this blog, you know that I've got arthritis in my knees.  Well, I think I may have found part of the reason why my right knee has gone on strike a couple of times--for years here in PNG, my daily rider has been a much modified 1985 Honda XR600R.

I love the old XR600.  It was one of my dream bikes as a kid and so when a rebuildable one came up for sale here back in what, 2003? I bought it and gradually built it into what it is now.

What it is now is a long story.  Sometimes at night when I can't fall asleep I try counting how many different bikes are represented in my old XR.  It's a long list and I usually fall asleep before I get to the end of it.  Suffice it say that even in it's original form the XR600R is generally not considered to be an easy bike to kickstart, and they did not come with electric start.  Some of the modifications I have made to mine give it plenty of power, but also make it even more difficult to start.  I can usually start it in 2 or 3 kicks, but it does take some effort, and when you consider the fact that I start it at least 4 times a day 5 days a week and usually at least twice on Saturdays, that amounts to a lot of kicking.

So, as an experiement,  I stopped riding the XR and switched to a variety of other bikes, most of which belong to customers of mine and which have electric start.  Interestingly, my knees seem to like this new arrangement, so I decided to finish up a long term project bike of mine that has electric start.

Unfortunately, this long term project bike was proving to be a pain to resurrect.  I'll eventually get it sorted out, but it still needs quite a bit of work before it'll really be daily-rider usable.

And then it happened.  Out of the blue, I learned about a 1998 Harley-Davidson XLH883 Sportster for sale in Madang: 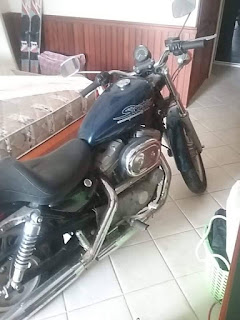 My initial reaction was "No way.  Not practical for PNG, plus everybody will think I spent a fortune on it."  Still, it was the only Harley I had ever seen in PNG, (I have seen an incomplete WWII era wreck on one of the islands, but that doesn't really count), and that made it interesting.

Harleys and I have had a complicated relationship over the years.  I've always liked them, but have never been able to justify spending the money people seem to want for them.  On the rare occasion when a really affordable one pops up, (like the time I saw a complete and running flathead 45 at a flea market in South Carolina for $1,500), I've just not had the cash.

And yet people have always assumed that I had one.  I can't tell you how many times people have approached me in various places and asked "is that your Harley parked out front?"  I guess being a large, heavy man with a big beard it was only natural that they would associate me with large, heavy motorcycles.  But for me it was hard to spend thousands on a Harley when there were so many old Hondas out there available for $1000.

But times have changed.  A lot of the bikes that I used to pay $750-$1000 for are suddenly classics now and going for $5000-$10,000.  Dime-a-dozen Japanese bikes that I used to haul off for scrap just because we had so many of them cluttering up the junkyard at the shop I worked at in Tennessee are suddenly being sought after by custom bike builders.  Dozens of shops, (Wrench Monkees and Cafe Racer Dreams to name a couple of the better known ones),  have made names for themselves by customising forgotten Japanese bikes that would once have been called "humdrum".  (Incidentally, I'm super happy to see that nowdays, if you want to build a bike you don't have to start with a Harley anymore.)

So there I was, looking for something with electric start and coming to the realisation that the Harley for sale in Madang actually ticked all the right boxes for me: it needed some work but was complete and running, it was already here in PNG, it was an easy bike to find parts for, and anything I might want to do to it in terms of modifications had probably already been done by somebody else before and posted on the internet.  That fact that it had less than 9,000 miles on it was also nice.

The price was reasonable, especially considering the fact that had buying and shipping any bike from the US (or Australia) would very likely have ended up costing more than twice as much by the time shipping, customs and duty charges were applied.

So I casually mentioned it to my wife, just to see what she thought.  "Well," she said, "I've been praying for you to get a Harley ever since we got married!"   What a woman!

Finally the last hurdle was simply the fact that the bike was in Madang, and I almost never go to Madang.  Wonder of wonders, the manager of my department just happened to mention one day that he needed to go to Madang and needed somebody to go along with him, so there went that obstacle as well!

So I contacted the seller and made him an offer.  He accepted, and a couple weeks later I was in Madang and loading my first Harley onto a truck to take back to the highlands.

Along the way, I learned quite a bit of the history of this bike. It was bought new in Ohio by a man who was associated with another missions organisation here in PNG.  In 2008 he shipped it to Madang, but he ended up leaving PNG sooner than he expected and sold it.  The man I got it from is an Australian who kept it in his bedroom, which was literally about 10 feet from the ocean.  I'll admit I was a little disappointed by the amount of rust that was on it until I realised that pretty much every rusty part was one that I was going to remove or replace anyway.

I could not wait to get started!  As soon as I got it home I started stripping off bits of rusty chrome.  Away went the big, bulky turn signals (I'll install smaller ones later), away went the sissy bar (passenger back rest), away went various bits of rusty chrome trim.  In the process I learned that it really is true--the more stuff you take off of a Sportster, the better it looks!  The 11" long rusty rear shocks were replaced with 15" shocks for better handling in the dirt (and what a positive difference those made!) and finally, as a proof-of-concept, I put a used knobby dirt bike tire on the front wheel in place of the 12 year old, age-hardened and slippery street tire. 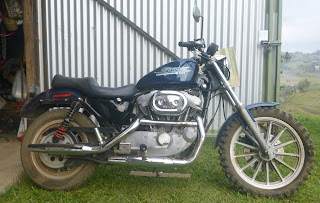 Further modifications will have to wait until January, I think, as the parts I need are coming by sea freight.  But they will include a different rear wheel, new tires, handlebars, front suspension parts and other things.  I'm not sure what I'm going to do about the exhaust yet--it sounds nice the way it is, but I kind of need it to move for reasons pertaining to other modifications I want to do and which I'll explain later.

At any rate, it is usable as is and I'm really enjoying it.  Yes, it weighs a ton!  Yes, other bikes ride better on the dirt roads of Ukarumpa!  No, it will never be a fantastic dirt bike!


Posted by Andrew the Mechanic at 10:43 PM No comments: