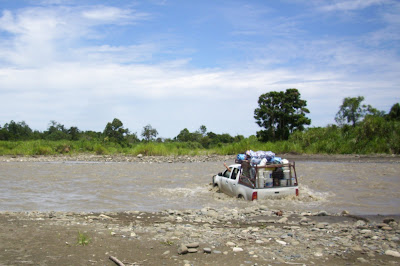 So! We're all done with the Pacific Orientation Course now. We left the course when the students left to go into the "village living" portion of their training. Village living lasts for 5 weeks and we had originally planned to return for the last week of POC, when all the students come back out of the villages, but Clare ended up having to stay behind in Ukarumpa to help out at the elementary school when one of the other staff members had to leave unexpectedly for medical reasons. In the end, I went back to POC by myself.

The day after I got there, I was asked to be one of the drivers who went out to the villages to collect the students. The POC Toyota Dyna, (a 3 ton truck that we use for carrying lots of people or supplies at one time) was still down with a bad transmission so we had to make multiple trips in POC's 2 Toyota Hilux double-cab pick-up trucks. That's one of the Hiluxes in the photo today, and that's one of the many river crossings we had to do. This is one of the "middle" depth rivers--there were several that were shallower and a couple that were significantly deeper--to the point where the wheels were completely under water and water was leaking through the firewall and onto my feet. (At least the door seals were still good and we didn't end up sitting in water!) The biggest river I ended up having to drive through 4 times that day. It was a good 100 yards/meters wide and well over 3 feet (1 meter) deep in the morning, though it went down a little bit during the day.

So the last week of POC went well enough, I started off with all the fun off-road driving, drove through one attempted hold-up, fixed up a bunch of Primus and Primus-copy pressurized kerosene stoves for the next group of POC students, got the POC director's beat-up '84 Honda XR200R running again, and since Clare and Levi weren't there, I got to spend a bit of time in the evenings with the other staff members and the students. All in all, a decent wrap up to the course.

This isn't to say that the course wasn't without its frustrations; Madang is a terrible place to try to get vehicle or machine parts, the POC workshop is in serious need of more tools, (and Madang also happens to be a terrible place to get tools--I spent $1,000 on tools that I could have gotten in the US for about $200, and that was only about 1/3 of what the workshop there needs).

But it was great to see the 30+ new people coming to help out with the work here, and I'm excited to see that another 30+ are expected at the next course in January.
Posted by Andrew the Mechanic at 9:44 AM No comments: