Christmas Break, 2018.  I had big plans.  There were a number of home improvement and maintenence jobs that I wanted to get done, there was a personal motorcycle project that I hoped to finish, and, if time permitted, I might even have started the resurrection of a dead car.  Big plans.

And then, just as the shop closed for the Christmas and New Year's holidays, my right knee decided to stop working.  I could not move it without tremendous pain, could not walk, could not  find a comfortable position, it was bad.  I was pretty much out of commission for the entire Christmas break.  So much for my big plans!

Joint pain is nothing new to me.  For several years starting back in my 20's I suffered occaisionally from tendonitis in my Achilles tendons, and sometimes pain in the little bones in my feet.  The first time it happened, I went to a doctor.  I described my symptoms and he said, "Oh, sure, that's tendonitis."  Relief flooded me, this wonderful dontor knew exactly what the problem was!  "Great!"  I said, "How do we fix it?"  I expected him to recommend a medicine or an exercise, instead, he brought my feelings of relief crashing down when he said, "Oh, there's nothing we can do about tendonitis.  You'll just have to try to stay off of it until it gets better."  Sigh.

Tendonitis plagued me off and on for a long time, and then, sometime in my early 40's, it just stopped.  That is to say, I can't rememeber the last time I had it.  It's been a few years, I think.

Also, from time to time, I have suffered a bit from gout.  Usually just mild cases, but sometimes more severe.  There is gout on both sides of my family, and they say it is heriditary, so no surprise there, I guess.

So when my knee quit on me, I assumed that it was just a terrifically bad gout flare-up.  But it didn't feel right--there was no redness and it wasn't painful to touch, at least not in the way that gout is.  I lived with it for a few days, then I started feeling like other joints were hurting, so finally, reluctantly, on Christmas Day in the evening, I called the Clinic.  I couldn't drive, so the nurse on call came and picked me up.  As she happened also to be on ambulance duty, she picked my up in the ambulance.  So I guess now I can no longer say that I have never ridden in an ambulance, though since I sat in the front passenger seat, I can still say I've never ridden in the back of one.

Anyway, she studied my knee for some time, asked lots of questions, consulted the doctor, and finally said, "Maybe it's arthritis.  Maybe you're just getting old."  Ordinarily I might have been offended, but she was so nice about it that I just couldn't muster up any ire.  In the end, she gave me a crutch to use and made an appointment for me to see a doctor after Christmas.  As for the pains I was feeling in my other joints, that was probably just a result of the weird, twisted way that I was forced to move when I needed to.

When I went to see the doctor, I was no longer in pain and we went through the usual question and answer time, blood pressure check and so on.  We talked about my knee(s), and what the possible problem might be.  Finally, she put a hand on my knee and asked me to straighten and bend my leg a few times.  Halfway through the first flex, she said, "oh, wow!  Yes, that's definitely osteo arthritis, it's just bone on bone in there!"  Then she felt the other one and said, "Yep, that one too!"  We talked about what could be done and she advised me that knee replacement surgery might be an option (sometime when I am not in PNG), but that replacement knees only last 10 years and they can only be replaced 2 times and then there's apparently not enough bone left to attach a new knee to, so many doctors won't consider doing a knee replacement on somebody under 50-60 years old.

Awesome.  No wonder I hate going to the doctor.

I'm in my mid 40's.  I don't feel old.  I feel like I am way to young to have arthritis.  Admittedly, I have not been kind to my knees in my life.  They've been through more than their fair share of trauma, starting way back in kindergarten when I fell under the school playground carousel/merry-go-round and got dragged.  While being dragged, my knee hit a big stone that was sticking out of the ground and it really hurt.  Eventually it stopped hurting and I more or less forgot about it, though that knee never did like to be bent for very long.

In my late 20's, I was in a minor motorcycle accident which hyper extended both knees, and of course there have been various injuries to both knees over the years that I have pretty much forgotten about.

Add to all that the fact that all my life I've gone either barefoot, flip-flops or cheap steel toed work boots. And pretty much every job I've ever had involves standing and walking around on concrete floors all day.  I don't think I've owned more than 6 pairs of sneakers in my life.  I don't care for sneakers, the ones I have owned always disappointed me with how expensive they were and how quickly they wore out.  However, because I was suffering these various pains, I tried all different kinds of insoles and looked into putting rubber mats in my work area, (those rubber pads are expensive, so I haven't gotten one yet).  Eventually I discovered Merrill shoes, which are comfy and seem to hold up well, so those are what I wear most of the time now.

And of course, being overweight for most of my life hasn't helped either.  There have been several times over the years when I lost significant amounts of weight, but it's only ever been temporary, and the weight always comes back with reinforcements.  Obviously the key here is diet and exercise, but it's tough to exercise when you can't walk and when you've been warned that your knees are worn out.  It's also tough to diet when the most affordable food is bread.  Lately I've just been trying the most basic of diets; simply eat less food.  I eat very little sugar and I try to keep my carbohydrate intake down.

Anyway.  This week I've had another bad arthritis flare up.  I don't know if maybe the weather has been affecting it, (it's rained every day here for weeks, there have been mudslides and road and bridge washouts all over the country).  So I've been holed in in my bunker (garage) "convalescing", I guess, catching up on e-mails, communicating with a friend in Albania who is writing a book and is interviewing me for part of it, watching old movies, that kind of thing.

It used to be that when this kind of thing happened I would get impatient with everybody around me and would whine and moan to God about why it was happening to me, "Lord," I would say, "I only want to do the job you sent me here to do!  Why have you allowed this?  People are depending on me!  How is this part of your will?"  Basically trying to point out to God (silly me) that there was no reason for this, and that if it just didn't happen, we'd all be better off.  Silly me.

And then one day I heard a recorded sermon from one of our supporting churches in England, where the pastor talked about trials, tribulation and pain in our lives and how we respond to it.  "Next time you are in a situation like that," he said, "instead of saying 'Oh, Lord, why me?' why not ask, 'Oh Lord, what are you doing in my life?   And try to find out what it is that he may be doing."

I have to admit that when I am down for a week and incapacitated, I do spend more time in the Word and in prayer and I have been focussing on being less of a bear to be around.  More than once I've had the thought, "How sad would it be if the only way that God can get my attention is when I'm incapacitated?"

I've said a number of things in this post that are probably heretical and will likely raise a few eyebrows among some of my theologian friends.  Don't worry, guys.  I'm not claiming to have it all figured out, and I'm aware of the fact that some of what I have said here could be seen as suggestions that God hurt my knee so that I would talk to Him.  That's not the thought I am intending to convey because I don't think that's how he works.

Anyway, I'm still learning how to live with arthritis.  I guess I just didn't expect to have to start learning that until I was, I dunno, 80 or something.

I'm thinking of making myself a set of C3PO knees. 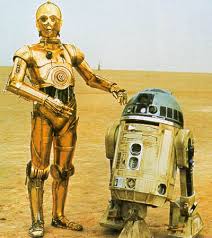 Posted by Andrew the Mechanic at 10:43 PM No comments: