Well, it HAS been a while, hasn't it?


Shortly after my last post I turned 40.  Suddenly, I was being picked to serve on all these committees, like the Executive Committee of the local branch of the organisation I serve with, a sub committee on that committee which is re-examining the way we govern ourselves here,  another committee dedicated to improving the Tok Pisin language and Melanesian culture school that we run for new people coming to work here from other countries, and an informal committee looking into the best ways to repair and maintain airstrips around PNG.

At work I've suddenly found myself accepting the role of "Assistant Manager" which means that I have to spend even more time in the office, chained to my computer.  At the same time, more motorcycles and small engines have been pouring in to be worked on.

At home I often find myself working on e-mails or reading materials related to the various committees that I am now on.

Anyway, I'm here now.  In the ever diminishing amount of spare time that I have, I've been working on this bike: 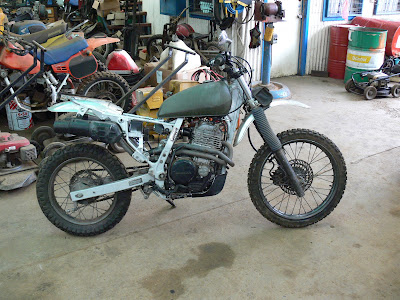 It's a 1989 Honda NX650 that I bought from a place in Tennessee where I used to work.  When I got it, it was missing a cylinder head, the clutch cover, all the reduction gears for the electric starter, and all the body work.  A lot of the missing parts I had here from an XL600R that I parted out. (that's why I have a kick starter on this NX now).  Other parts, like th ecylinder head, the 1970 SL350 fenders and the starter reduction gears, all came from eBay.  The fuel tank is from a 2 stroke Suzuki Ag bike (a TF125, I think?).  The cylinder was wrecked from having sat outside int he weather for a year without a head bfore I bought it, so I had to bore it out.  I decided to go ahead and go with a big bore kit and went out to 675cc.  The bike had a nearly new rear tire on it when I got it and the front tire on it now is another new one that was given to me by somebody who left a few years ago.  I know the CDI boxes on these things are like the ones on the later XR650L's--that is to say that they are unreliable and DC powered.  After doing some searching on the internet I discovered that switching to an XR style stator would allow me to run an XR style AC powered CDI box that is much more reliable than the original one was.  I'm going for a somewhat battered look on this one, which is why I am deliberately using a tank with a dent in it, a slightly mangked set of fenders, etc.  I want people to look a this bike and wonderif maybe I rode it here from the US.

That's it for now.

Posted by Andrew the Mechanic at 12:33 AM No comments: