Tomorrow we fly! London to Tampa, about an 8 hour flight in a Boeing 777. I think this might be my first flight in the Triple 7, not sure.

8 hours of pure misery. Horrible seats, screaming baby and wailing little boy, too much luggage, trying to avoid overpriced "help" in Tampa airport, etc. I like travelling, I even like airplanes, it's just airliner seats that I loathe and despise.

All in all, I think I'd much rather travel by airship. That'd be cool. What a relaxing way to travel that would be! (Most of the time--I'm sure that things can get pretty hairy in an airship, too.) But how cool would it be to be living on a big airship for a few weeks while you travel from place to place around the world? Maybe have a hammock to sleep in, maybe a comfy chair to lounge around in, maybe an observation deck to stroll around. Ah, bliss!

Once or twice in my life I've had the opportunity to fly first class or "business plus" class for free. Man, that was nice. But to fly anywhere now is so expensive even for cattle class that upgrading to anything better is pretty much out of the question.

It'll be good to see Mom and Dad Koens again! They haven't met Heidi yet, so naturally they are looking forward to that! Levi is excited about going to see them, too. Tonight when I tucked him in to bed he said, "I want to go to Oma-n-Opa's house NOW! I don't want to go to bed!"

So, while in FL, I need to beat our car into shape and then hit the road, north to North Carolina and Tennessee!
Posted by Andrew the Mechanic at 8:56 AM No comments:

St. Saviour's, Brooklands, we must be south again

Scotland was great! I really liked it--it seemed really cold at first, but while helping my new friend Adrian clean up the grounds outside his late 17th century castle/manor (it doesn't really fit into either of those categories in my mind), I got used to the cold and wet and eventually found myself working outside in my t-shirt and jeans, in weather that would normally have me dressing in many layers.

I was pleased to be offered the chance to eat haggis, since I generally like to sample the local cuisine wherever we go. I liked it, and would happily eat it again.

We hung around up North (it's always capitalised on the motorway signs i.e. "this way to The North"), for a week or so, staying in Scotland for 3 days, then in a place near Keswick for a few more days, from where we visited friends of ours working with Operation Mobilisastion in Carlisle, (I also took the time to visit Carlisle Castle--which is a "real" castle, and worth a visit if you are in the area and are into history and castles, as I am). We drove up into Scotland a second time to meet up with some friends for the day, visited the Castlerigg standing stones, visited the Keswick Illusions Museum, where we took this photo: 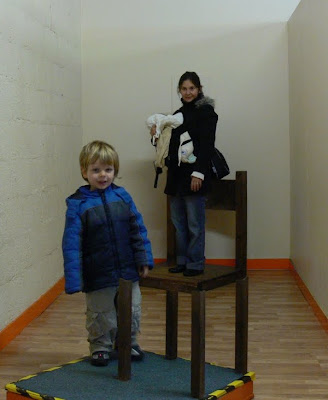 Naturally, Levi didn't quite understand what was going on, and the camera angle isn't 100% perfect, so the effect is a little bit spoiled, but you get the idea.

After all that we took the longest road trip we have yet done in the UK, and drove all the way down to Guildford, (south of London, The South), where we have friends and where we were scheduled to speak at St.Saviour's, the church where we were married. That was a long drive, as both kids were really unhappy, Heidi screaming for a lot of it and Levi crying inexplicably. Poor kids, they must be really sick of constantly moving around, and who can blame them?

So this last Sunday we spoke 3 times at St. Saviour's, (both of the morning services and the evening one) and also made ourselves available for a special seminar on Bible translation that was put on after the evening service. It was the first time that we've had four things at one church in one day. All went fairly well. We are used to using a lectern/podium, so when we were given a hand-held microphone that threw us for a loop as we suddenly had to figure out how to shuffle our presentation notes and the microphone around. But like I said, all went well, we got the message out about who we are and what God has us doing in PNG.

Today we spent most of the day with Clare's folks who drove down from north of London yesterday to visit us. We went to the Brooklands Museum, where I got to see all kinds of cool stuff, mostly pre-war racing cars and bikes, but also some airplanes, including a replica of a WWI Vickers Vimy bi-plane bomber that over the last 15 years or so has flown California to Ireland, UK to Australia, and UK to South Africa, all at the blazing speed of 75 mph, and remember that the Vimy is an open cockpit aircraft. It sounded like a fantastic adventure and one I would love to have been a part of. Maybe one day Levi and I will drive the Land Rover back to the UK or the US from PNG. That would be a similar kind of adventure.
Posted by Andrew the Mechanic at 8:19 AM 2 comments: 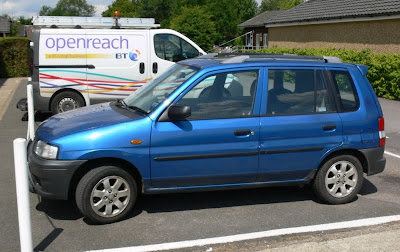 Yep! It's that time again! Time to load up the Mighty (Battered) Demio and move house again. It's pretty easy this time, as Levi is staying the weekend with Granny and Grandad, so we can use his seat as a place to put stuff.

And so, we bid a fond farewell to the "Moffat B" flat here at the Wycliffe Centre, oganising our goods and chattel into our various suitcases and army duffel bags, (and one big, old wooden chest!) cramming them all in, and heading out first to the petrol station to fill up the tank and the tires, and then to Clare's parents' place in Barnet. Once there, we plan to off-load a lot of the cargo from the holds of the good ship Demio, pick up our cabin boy, (Levi), and point our bow to the north.

We have several places to visit, but will eventually end up in Scotland before we turn south again.

Okay, so I wasn't sure about a daughter at first--I know that I didn't have a say in the matter, and I know that we couldn't exactly send her back, so obviously I knew as soon as she was born that we were now the parents of a girl, but still, at first I was surprised and asked myself the question, "what in the world are we going to do with a DAUGHTER?!" All of this ran through my head in just an instant. In mere nanoseconds I went from "Oh, no! A girl!" to full acceptance. And then to fatherly love and wondering how in the world I could ever have thought anything other than "Hooray! It's a girl!" All in the twinkling of an eye.

Anyway, here's a couple of photos of Heidi with Daddy. These have been shown in other places, I know, but there are those who will see them here who won't see them on FB or in our newsletters: 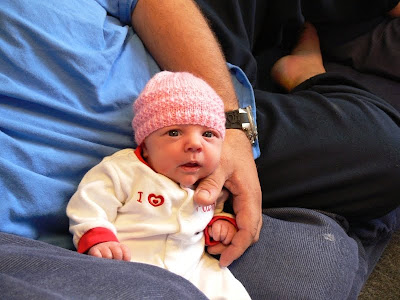 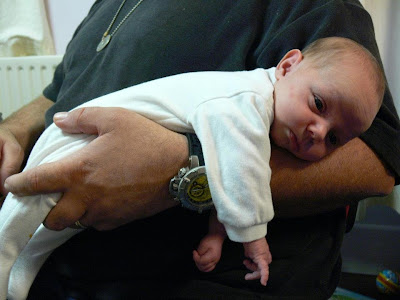 She's still pretty nocturnal and keeps Clare up a lot at night. Levi is getting into the spirit by showing up in bed next to me every morning around 4:00 a.m., I'm not sure what that's about, as I don't usually wake up except to help him get under a blanket, at which point I fall asleep again until he decides to start singing sometime later.

I am looking forward to our road trip, however. We have several friends to see along the way, so that will be great.
Posted by Andrew the Mechanic at 3:03 AM 2 comments: