I love road trips. Especially on motorcycles, but in a car with friends is also really good. Here in PNG we don't normally do any very long road trips--Goroka is about 100 km away, (2 hours in a car, 1 hour on a bike--it's the curves and hills that kill a car's speed so much on that trip), Lae is 230 km away, Madang is 260 km away and those are the 3 most likely places that we are likely to go to by road. Mt. Hagen is also reachable by road, but it's 300 km away and the road is often blocked by landslides/landslips, plus there aren't a lot of reason to go to Mt Hagen, so I've only been there once by road. Mt. Wilhelm isn't a town, but it is another place that people in Ukarumpa might drive to, just because some people like the idea of getting up at 3:30 in the morning to climb to the top of PNG highest mountain (13,000 ft. I think?), just to see the sun rise and then rush back down before the fog cuts visibility down and makes the descent much harder. It's really not my cup of tea, so I've never been there. I understand that there is a plane wreck up there, though, so someday maybe I'll go along so that I can play around on the wreck while everybody else goes up to see the sun rise.

Anyway, where was I? Oh yes. Road trips. Lots of good reasons to do a road trip here. For one thing, it's a way to get away from Ukarumpa. Sometimes you get to feeling like you'd just like to be somewhere else for a little while, and a road trip to Lae does it for me, though most people seem to prefer Madang. Another good reason to go is because there are no restaurants in Ukarumpa! Hard to believe, but it's true. If you want to go out to eat, you've gotta drive at least 100 km to get to a restaurant. Okay, so there are one or two restaurants in Kainantu, which is only a few km from Ukarumpa, but (it must be said) they leave a bit to be desired. Another good reason is shopping. Lae has some of the best stores in PNG. Lae actually has not one, but TWO pretty decent supermarkets, as well as a couple of slightly less decent ones. Lae also has the best places to buy appliances when your stove or fridge finally bites the dust. Oh, and an added perk--our guest house in Lae has a pool. Sure, it's only 3.5 or 4 feet deep and isn't exactly Olympic sized, but man, after a long, hot, dusty day in town it sure feels nice.

Road trips are on my mind today because I nearly had to go on a road trip to Mt. Hagen tomorrow in the Mighty M813A1 Cargo Truck: 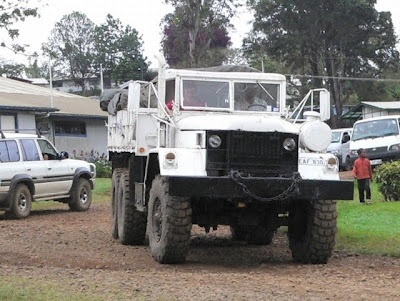 In spite of the fact that I generally enjoy road trips, I wasn't looking forward to this one, as I am getting behind in my work here in Ukarumpa and besides I just did a road trip to Lae last week. (Lae and back in one day--I hate doing it that way; I much prefer to spend the night, but this time it couldn't be avoided.) Anyway, my friend Tony is doing the Mt. Hagen trip now, so that's all good.

Road trips here can present special challenges. I've already mentioned landslides, but it's also worth noting that at least 40 km of the road to Madang through the Finisterre Mountains is not paved at all, and the road to Mt. Hagen also has big stretches of un-paved road. In this case, the destination is actually somewhere beyond Mt. Hagen, and may involve a fair amount of driving on a pretty rough dirt road. Before driving to Lae it's always wise to ask around and see what the road is like, as its condition changes pretty often, from "full of nasty square-edged potholes" to "new pavement, a regular, 2 lane, superhighway". Before going to Goroka, it's worth finding out if there has been any tribal fighting in the area and if all the bridges are up, especially during rainy season, when bridges are more apt to be washed away.

As long as you remember to keep an eye out for the three perils of the PNG Highway, you're generally okay. The P's are Pigs, People, and PMV's (PMV's being Public Motor Vehicles, sort of privately owned buses).
Posted by Andrew the Mechanic at 3:12 PM 2 comments: