So everywhere you go on this terrestrial sphere, you'll find people who lavish care and attention on their cars.  One of the most common ways that you can tell a person likes his or her car is by whether or not  they choose to accessorise it.  Accessories can be as simple as the classic flower bud vase that used to be popular in old VW's, to million dollar paint schemes and custom made wheels.  Extremely popular accessories would include fuzzy dice hanging from the rear view mirror, steering wheel covers, and bumper stickers.

In addition, each country and culture has it's own spin on what it considers to be "cool".  A taxi driver in Peru, for example, might have a seat cover made out of large wooden beads and a statue of the virgin Mary on the dash board.  Another in India might have a small representation of his favorite deity.  In the Southwestern USA, you might find miniature Native American dreamcatchers hanging from rear view mirrors.  In upper east Tennessee it's popular for kids to hang the tassle from their high school graduation caps there.

And sometimes, if you are lucky, you might see this: 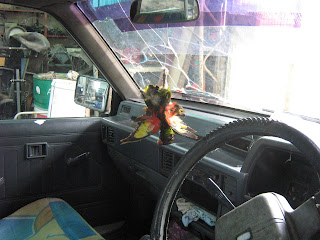 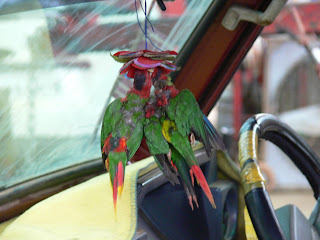 Yep!  Those are dead birds.  Not to worry, they have been carefully dried out so that they don't attract any vermin, and they should stay well preserved for quite a long time.  Lovely plumage, to be sure.

And then there's me.  I did a little accessorising myself over the weekend--our shop rescue truck is down, so I decided to optimise my Land Rover for light rescue duty, (pulling people out of ditches, hauling small trailers, that sort of thing.)  So to that end, I installed a trailer hitch and the biggest clevis I've ever seen: 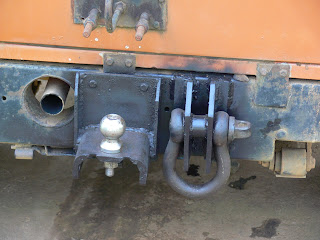 I made the mount for the ball and the attach point for the clevis out of pieces of scrap I found around the shop.  Don't worry about the 2 little bolts holding the trailer hitch on, there are much bigger bolts underneath, where you can't see them.  I also added a rear view mirror, since all the ones that were on there have been stolen over the years.  The new one is a motorcycle mirror that was given to me by a friend in Tennessee, (along with a bunch of other odd parts).  Here it is: 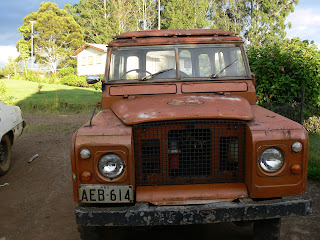 In this photo you can also see a couple of my other efforts at accessorsing--namely my custom built grille and the OOOOOOGAH horn that was given to me years ago by a friend who left.  One day I would still like to put a set of the early style narrow headlights in behind that grille.  That would be cool. I've got the parts, I just need to do it...

While I was under there working on the trailer hitch, I discovered that one of the U-bolts that holds the spring on on the right side was missing, (I assume it must have broken and pieces fell out), so I replaced it with an old one that I had.  I was puzzled as to why the U-bolt had broken, it was a new a couple of years ago, and from a reputable company.  In contrast, the one I put back in had been on there with an older set of springs I for many many years.  I plan to keep an eye on all the other new ones to see if they start breaking, too.


So early this week a guy came into the shop and asked about hiring us to haul a small excavator with our 6x6 5 ton truck (M813A1 for those who care).  I gave him an estimate of what it would cost, he was quite happy with the price, even paid 100% up front.

Now at this point some of you might (logically) be asking why a bunch of missionaries with a truck would be charging at all.  That's a fair question.  The reason is because if we didn't, we wouldn't be able to do it at all.  So we charge enough to cover our costs, but then we have to be careful not to undercut our competition, because we aren't here to steal anybody else's business.  So whatever we take in that is over and above our operating costs gets plowed back into other areas where we don't charge enough.  A real business would be interested in turning a profit, as part of a non-profit organisation, we are usually content to simply stay out of debt.  In the case of our off-road trucking service, there is nobody else locally who can carry loads as heavy as we can on rough dirt roads.  If there were competition, we'd probably have to raise our rates to keep from undercutting them (convoluted, I know).

Anyway, back to my story:  I'm the shop manager this week, as the incoming manager doesn't get here until sometime next week and the outgoing manager's last day was last week.  So I took the job and took Marty and Evan with me, as there is a good chance that either one of them could end up doing these trips in the future and I knew that the experience would be good for them.

It was a short haul, a little under 3 hours total time.  It was pretty straightforward, a beautiful day, nice and dry, the roads were all there, no big washouts, only a couple of bridges to deal with, and those were short and in reasonably good shape.