One of the most practical skills learned by any mechanic is the ability to troubleshoot. In this case, troubleshooting is evaluating a machine that isn't working properly, usually by talking to people who used it last, trying to get it going, etc. Eventually the mechanic builds up a knowledge of what should be happening, observes what isn't happening, and investigates what it will take to make it work.

Sometimes, I'm called upon to troubleshoot a machine that is far away from my workshop. Sometimes I'll be asked to troubleshoot something over the 2 way radio, or through a series of e-mails or even letters. I call this long-range troubleshooting "troublesniping".

Recently I was asked to troublesnipe a generator out in the Sandaun province, which is hundreds of miles from here, and the only way to get there is to fly as far as you can, then catch a ride on a series of local trucks the rest of the way. It takes days to get out to the village, and it's not practical to haul a 300+ lb. diesel generator out of there unless you REALLY have to.

After talking extensively with the translators who work out there, looking at photos of a broken part, and spending a few hours researching on the internet, I finally decided that the problem must be a bad capacitor. Unfortunately I didn't have any capacitors of the type we needed in stock and the people who built the generator were very unhelpful when I tried to find out if they had the parts we needed, so I did a bit more internet research and finally took an educated guess at what we needed. I tied to find a part that was much heavier duty than the one that had failed, in the interest of longevity.

Now the fun part! I had originally planned to get out to the village and install the part myself, but for various reasons this ended up not being possible, so I talked to the translator and expalined to him that he would have to install it. Unfortunately, he wasn't going to be going out to the village as he had originally planned, so he asked me to write up a set of instructions so that his village language helpers could install it.

Well, if it had been a simple case of removing the old part and replacing it with a new one, it would have been easy. But the heavy duty part I had chosen to replace the original one was a good deal bigger than the original, so, with the help of another similar generator I built up a nice little rubber mounted holder for the new capacitor and a set of extended wires to connect it to where the original capacitor used to be plugged on. Then I took a bunch of photos of the part in various stages of installation, wrote a set of directions and hoped for the best. The final curveball came when the translator asked me if I could "pre-charge" the capacitor before sending it out to the village. (In order for the generator to work properly, the capacitor needs to be charged up, sort of like a battery, but imagine a capacitor as a battery that releases all of its stored energy at once.)

I admit it, I really didn't think that pre charging the capacitor was going to work, or at worst I feared somebody might shock themselves while trying to install it, but I went ahead and gave it a go anyway, remembering to carefully wrap the wire ends with electrical tape before shipping it out to the village. Somehow I didn't have a photo here at the house--how boring! I'll have ot add one later.

Anyway, here's what happened, in the words of the translator who works out there:

Okay, so I've mentioned my all time favorite PNG truck here a few times before. It's the 1979 AM General, 6 wheel drive, 5 ton cargo truck, the M813A1. Ours is an ex-USMC example, with the locking differentials in the rear, which means that it is an extremely capable machine. We also have the PTO driven 10 ton winch on the front of ours.

I admit it, I was starting to feel a little bad about the fact that we weren't using the truck much. I am pretty sure that I have discussed our reasons for buying it elsewhere in this blog. At any rate, we bought it, shipped it here, sorted out various little problems that it had, and then did exactly what the US Marines apparently did with it for much of its 30 years--we parked it and only used it once in a while.

And then one day we got asked to haul some cargo for a Papua New Guinean man who had worked for Wycliffe for many years and was moving all of his goods and chattel back to his home village, which was about 10 or 12 hours drive away, and very much of that on rough, single lane dirt roads. We struck a deal on the price for this kind of hauling, and suddenly people started coming out of the woodwork asking for us to haul cargo to remote places.

My friend Tony did the first trip, and I went with him on the second trip. On the second trip we were hired to haul a 4 ton piece of mining equipment out to a place about 3 or 4 hours from here. It was a dreary, drizzly day and the road was mostly mud and had several places like this in it: 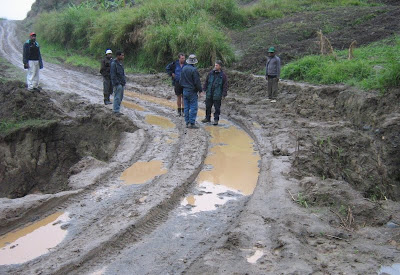 Don't be fooled by the ruts in the road--those are the width of "normal" cars, which, if you are reading this from the US, are narrower than what you are used to, and quite a bit narrower than our 6x6 truck. There were only inches to spare on either side of the wheels, and these washouts could really only be safely crossed with the help of somebody standing on the far side helping the driver make precise adjustments to the wheels. That was my job this time. We also had to cross several old Bailey bridges, some better than others. This was probably the best one: 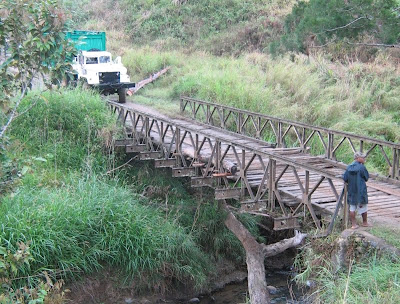 When we got close to our destination, we were stopped by a group of obviously angry young men who demanded that we shut off the engine and wanted to know who we were and what our business was. Instead of shutting down, we reversed out of there and back into more friendly territory until we could figure out what was going on. What followed was a heated 45 minute discussion among the members of one clan arguing about why the other clan had stopped us, what should be done about it, etc., etc. Eventually we were told by the men who hired us to just unload the truck and they would figure out later how to get the load to where it was supposed to go. We were halfway through unloading it when suddenly we got word that it was okay for us to drive through to the original destination, so which much effort, we got the load back on to the truck and tied it back down, then drove on through the troubled area, (turns out that there was fighting going on between two clans in that area, but the very same guys who had angrily stopped us before were all smiles and cheers when we drove through the second time), and eventually made it to where we had been hired to go. By the way, this is what our load looked like--I took this photo at about 6:15 a.m. as we were doing a final check of the load before hitting the bush road: 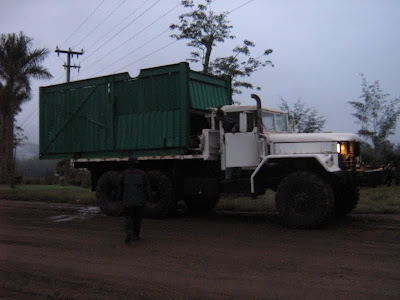 So when we got to the final destination, the equipment that was originally supposed to be there to unload the truck wasn't there yet and the guys who hired us told us to simply chain the load to a tree and drive the truck out from under it!! I got some good video of that, here's Tony carefully driving the truck out from under the load, EXACTLY according to the directions of the man who built the machine that we were unloading. He's standing on the other side of the truck, giving Tony directions through the driver's window. It's my voice you hear in the foreground as I was getting impatient and wondering why it was taking so long to unload :


So we've got a couple more of these trips planned in the not too distant future, the next one is down into the Ramu valley to move 7 tons of lumber for a local guy and I'll be driving for that one. Then it's back to where we dropped off the mining equipment to drop off a mostly empty 20 foot container that they will be using as a secure storage area. Hopefully the road will be a little bit better this time, as an excavator is being driven up there on that road and he will have to make repairs to it in order to make it through.

So why do we do this? Well, the fact is that we are in need of funds! We don't make very much money doing this, but we do make a little and it helps to keep the workshop open and to pay our employees. Anything extra gets funneled back into Wycliffe to support the work of Bible translation. We've been trying to do more commercial work lately and this is one of those services that we can offer which is in demand and which no one else is offering.
Posted by Andrew the Mechanic at 9:01 PM 3 comments:

Okay, so I've only got a few hours left before the deadline to finish this bike I've been working on in my "spare" time. It won't actually be "finished", but it might be close enough to please the judges in this on-line build off that I entered a few months ago. Anyway, I'm pretty happy with it so far. It's actually a bit closer to done now than it was when I took this photo yesterday: 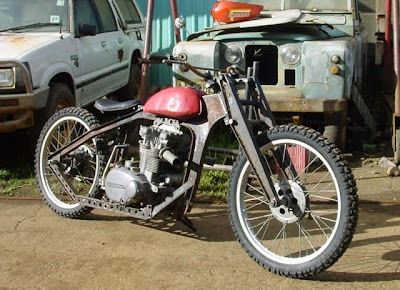 Good stuff. Practical? No way. Fast? Probably not. Why build stuff like this? Ummm, well, people climb Mt. Everest "because it's there", maybe I do this kind of thing for the opposite reason; because it isn't there. It's just an outlet for my creativity, I guess. I certainly learn a lot whenever I do something like this--I'd never built any kind of I-beam frame before, nor had I ever built a girder front end before, (wow, that was a learning experience! Next time I build one it will be much better than this one). So there, call it "professional development".
Posted by Andrew the Mechanic at 8:21 AM 2 comments: