the CHEVOTA, part one: the V8


Alright, so if you've been paying attention, you know that some time ago we got a new rescue truck for the shop, a 2002 Ford F350 with the big, bad, beautiful 7.3 litre International turbo diesel V8.  And it has been great.  Going out on a rescue knowing that you have enough power, weight, and traction to pull a Land Cruiser out of a ditch SIDEWAYS is an awesome feeling (if you are into that sort of thing, and I am).  Also, having 6 big, lockable tool storage lockers is something you quickly come to appreciate after you've had a few tools and jacks stolen.  That and still having a full length cargo area and 4-6 seats in the cab, (I could go on and on); suffice it to say that our F350 is truly an awesome PNG rescue vehicle and one I thank God for providing every time I use it.

Our old rescue truck was a late 1990's Toyota Land Cruiser pick-up truck, (an HZJ75 for those who want to know).  Old, beat-up, half-a-million hard kilometers on it, seems like every time we took it out we discovered yet another area where it was lacking something we needed.  And yet...

There are times and places where the Land Cruiser is still the better vehicle.  A rescue out in a place where the bridges are nothing more than a couple of logs laying across a river, or where the risk of damage to the rescue vehicle is particularly high either due to road conditions or due to unrest among the tribes in the area where the rescue needs to happen.  In short, if we have to lose one or the other, we'd certainly rather lose the Toyota.

So the Land Cruiser is lighter than the Ford, has good 4x4 capability, and is more expenadable.  It is also (perhaps surprisingly in a country where Toyota is pretty much far and away #1 in sales of new vehicles) harder to support.  The Ford is no problem; if we need a part, we simply look up the part number, contact our co-workers in North Carolina, ask them to buy it and ship it to us and in a month or so it's here.  No drama.  The Toyota on the other hand can be a huge hassle.  Finding part numbers can be a pain, trying to figure out exactly what you need with the dealer (often while communicating in a mix of English and Pidgin) can be a pain, and then it still takes a month to get the part from Lae (around 250 km from here).  Then we often discover that we've been sent the wrong part and have to start all over again!  And before you suggest it, getting parts for a General Export Market Land Cruiser from Australia or from the US is not the neat solution you might think it would be.  In their infinite wisdom, most car manufacturers make very different cars for different markets, and I'm not talking about just different engines or different emissions control systems, oh, no!  Simple things like tie rod ends, ball joints, suspension parts, things that we have to replace all the time here are usually not interchangeable from one market to the next.   Plus a car sold here as new in 2005 might not be anything like one that was new in Australia in 2005, but might more closely correspond with one that was new in say, 1997.  So we've learned over the years that it's best to try to get the parts from our local dealers, even though it's a hassle and they tend to be very expensive.

So back to the Old Black Land Cruiser.  We had another similar truck in the fleet that was due for retirement.  We stripped it down and transferred a lot of its good parts to the Black Land Cruiser, which caused it to become the old Black and White Land Cruiser now.   The engine from the retired truck was still good, but we saved it for another truck, which means that the Old Black (and now White) Land Cruiser was still suffering with a worn out 1HZ diesel engine.  Because a lot of us in the shop are sort of natural born hot-rodders, we used to laugh and joke about how cool it might be to put a 350 Chevy engine in the shop Land Cruiser.  "Hahaha!" we'd say, "cool idea, but it'll never happen." this was usually followed by a collective sigh.  Not that we dislike the original diesel engine, it's fine, and not bad for a diesel, but it's nothing special, either.  1HZ fuel mileage is terrible, power is so-so, they don't handle abuse terribly well, and they can be expensive to support.

So when it became clear to us that we needed to keep the old truck around as a general use/extreme rescue truck, (replacing it with a new truck wasn't an option for us--I won't get into that right now), and when it became clear that we needed to either rebuild or replace the engine in it, we did a feasability study.  We checked on what it would cost to rebuild the original engine, (doing the work ourselves here in our own shop) vs. replacing it with a brand new small block Chevy V8 and the assorted adapters needed to install it.  After months of research, it eventually became clear that the cost of rebuilding the Toyota engine was going to be almost exactly the same as converting to Chevy power.

At the time, me and Ben were managing the shop, so it became our decision.  We thought about it for a while.  On the one hand we'd end up with a rebuilt Toyota engine, an engine that was adequate at best, got lousy mileage (for a diesel) and really wasn't the best engine for our use (lots of short trips) and on top of all that was hard to support and getting harder to support.  On the other hand, we'd end up with a completely new engine, one that is perhaps the easiest engine in the world to support and (perhaps surprisingly) gets just as good a fuel mileage.

Yeah, it wasn't a hard decision.   Last Saturday Ben and I started getting the engine ready for install (happy, happy, happy): 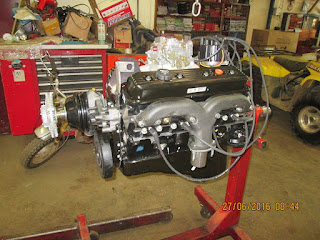