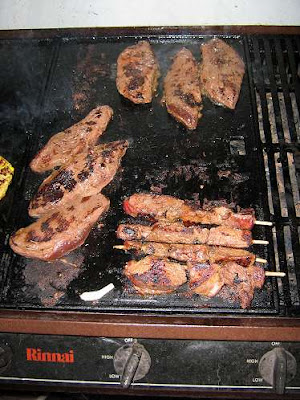 So, today being Friday and all and because we haven't done much in the way of just pure socialising, the Knuckeysand us decided to have a barbeque. The girls sent us off for the meat while they took care of other things.

Once we got to the store we noticed that marinated kangaroo fillets were actually cheaper than beef, so we decided to give them a try. We also got some kangaroo kebabs. Here you can see if all sizzling nicely on the grill.

It was really good. I think kangaroo may be the perfect BBQ meat because it doesn't seem too sensitive to the amount of time it spends on the grill. Sometimes, 1 or 2 minutes is all that seperates a really nice beef steak from a merely mediocre or even awful one, but kangaroo doesn't seem to be that way. It has a somewhat stronger flavour than beef, but I like it. I'll definitely eat it again sometime.

While we were cooking, Damien (Knuckey) and I reflected on how declaring a BBQ gets the entire household mobilised--decide to cook meat over fire outdoors and suddenly everybody is involved. The men gather around the flames and the meat and swap opinions on how the meat should be prepared and cooked, the women gather inside and chop up veggies for the salad. I said it must be some sort of primal instinct. And what better way to socialise than to roast and eat meat? Or veggie burger patties if you prefer. At any rate, a good time was had by all.

For those of you following the Tale of the Moto Guzzi, I believe it is done now. I may take it for another test ride tomorrow.

Posted by Andrew the Mechanic at 10:42 PM