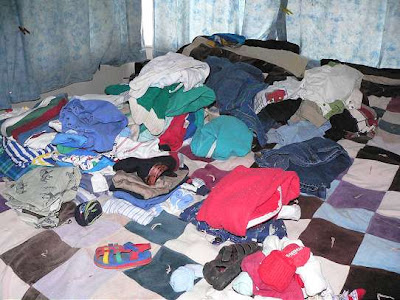 One of the nice things about living in Ukarumpa is how supportive the community there can be. When our fellow missionaries heard that we were expecting a baby, we were suddenly showered with no end of baby clothes and baby equipment. Eventually we had to even start turning people down when they would call with the offer of another crib or playpen or high chair. We constantly marvel at the generosity of those we work with. This photo (taken a few weeks ago), shows about half of the baby clothes we have been given so far.

This evening was Missions Prayer Night at our hosts' house. Several young people from the Knuckeys' church showed up and we spent some time with them explaining who we are and what we do in Ukarumpa, as well as talking about missions in general. We were asked to talk about how people at home can best support missionaries, so we talked about prayer support, moral support and financial support.

Prayer support is exactly what it sounds like--spend time praying for your missionaries. We often underestimate the importance of prayer.

Moral support is one that doesn't get talked about very often, but is one that I think will soon be getting more attention as it gets easier and easier to communicate with missionaries in the field. Moral support as we described it tonight is mainly just communicating with your missionaries, letting them know that you prayed for them or sending them an encouraging e-mail from time to time, or even just spending a few minutes chatting with them on-line if you can. We also talked about care packages from home and how it's not as important what's in the package as it is to just send one so that your missionaries know that you care about them.

Financial support is also an easily explained one--missionaries with Wycliffe (as well as with many other organisations) don't get a wage--our daily living costs are covered by financial gifts from friends, family and churches in our home countries.

Clare and I appreciated the opportunity we had to chat with the folks who came to the prayer meeting. It was good getting to know them a bit and to spend time in prayer with them for other missionaries as well as being prayed for by them.

Huh! It occurs to me that this post is all about the Body of Christ in action.
Posted by Andrew the Mechanic at 10:28 PM