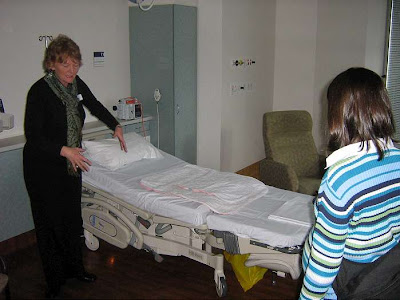 Yesterday (Wednesday) we went to the Mercy Hospital for Women where we are planning to have our baby. On Tuesday we drove there on a recon mission so that we would know how to get there and what the parking situation might be like. While there we asked about the hospital's somewhat enigmatically named "Labour Overview and Tour" (made me wonder if maybe we were going to have a tour of labour--maybe even ride in little carts shaped like babies through a gigantic birth canal with lots of confusing lights and sounds to end with being picked up and slapped on the bottom by a giant mechanical doctor), and found that the next such class was scheduled for the next day and the next class after that wasn't scheduled until sometime after our baby's due date.

So we signed up and found ourselves in a class with another couple of about the same age and condition as ourselves. Like us, (unusually), they also had just come in from overseas, but they had come from much farther away and we still showing obvious effects of jet-lag, poor things.

The class was interesting and informative, but I found the video to be extremely emotional. It was an American produced video with lots of touching scenes of expectant parents holding each other, supportive fathers massaging their wives' backs, babies being born etc., all to very stirring background music. I had a hard time not weeping, then despised myself for weeping at the recorded images of other people having babies. I'm not afraid of my feelings, (not by a long shot), but I'm sure that there won't be a choir singing in the background when our baby is born--not to suggest that the birth of our own won't be an amazing and beautiful thing. Ask me more about this after he/she is born.
The photo is of the midwife who conducted the class explaining how to use the bed in the labour room. The midwife was a very nice lady who had spent some time in PNG in the '70's, so when we learned that, we immediately felt as though we had a connection with her.
The class went on for about 2 hours--I admit that I was never a good classroom student, so my mind wandered from time to time, but overall it was a good experience. Clare found it to be very helpful, especially the tour of one of the birthing rooms and the maternity ward. I was glad to learn about where to park the car, how to get the doors open if we arrive at night, etc., etc. All the little details that will make life so much easier when the time comes.
On a related note, I had noticed that the car we've been driving had a very rough idle that seemed to be getting worse and I had nightmares of trying to drive to the hospital in a car that wouldn't idle but would only run full speed or not at all, (trust me--I've done this and it's not as fun as it sounds), so on the way home from the hospital we found a car parts place and bought some fuel injector cleaner. It must be good stuff--I put it into the tank before we left the car parts place and by the time we got home the engine was running noticably better. When we drove to Bible study later that night it was running even better, so I have high hopes of having it purring like a kitten by the time Baby is born. Phew!
Posted by Andrew the Mechanic at 10:01 AM