In Which Kangaroos Figure Prominently 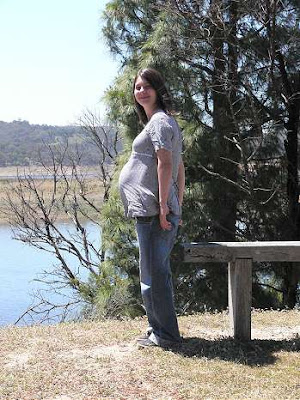 Wow! It's been 5 days since I last posted on this blog! I was shocked when I looked at a calendar and relaised that it had been so long. We've been keeping busy and so I'd lost track of the time.
Here's a photo I took of Clare when we were out exploring the Wilds of Australia. Yesterday we took a short trip to the Sugarloaf Reservoir. As it was the middle of the day on a weekday, we pretty much had the whole place to ourselves. It's pretty country out there, lots of rolling hills, evergreen and I think gum and eucalyptus trees, (I'm not a botanist), and short grass growing everywhere. And kangaroo sign EVERYWHERE. Either kangaroos cover a lot of territory in a short time or the place is simply overrun with them. The other day we saw dozens of them in another little fenced-in park we visited. Certainly not endangered, are kangaroos.
Yesterday we also took a trip out to the headquarters of Wycliffe Australia at Kangaroo Ground, (there's that word again!), and had a look around. We enjoyed the opportunity we had to catch up with some of our PNG friends who are there now, like Faye Canavan, Jim Savage (leading a WA construction team from the US), and others. One man we spent quite a bit of time talking to was our old friend David Wake, who is involved in all sorts of things for Wycliffe Australia, mainly along the lines of recruitment and training. I think "mobilisation" is the term we're usin these days. Here's a link to one of the exciting things he was telling us about. http://www.endsoftheearth.com.au/index.html It's about a program called Go MAD Oz 2009, which sounds like loads of fun.
Tuesday night I went to the movies with Knuckey and a couple of his mates. It was the first time I have been to a movie theatre/cinema in Australia. It was just like any other movie theatre I've been to in the US or in the UK--a big room with a sloping floor, lots of seats and a big screen at one end. I like going to the movies--it's something we can't do in PNG, (no theatres/cinemas), so when we are away from there I like to try to get in a movie or two. Simple pleasures, I know. Clare went to another theater/cinema with Alison to see chick flick. I am so thankful that my wife doesn't insist on me going to romantic comedies with her! And also thankful that she is okay with me going to guy movies.
No kangaroos in either of the movies we saw.
Posted by Andrew the Mechanic at 11:16 AM