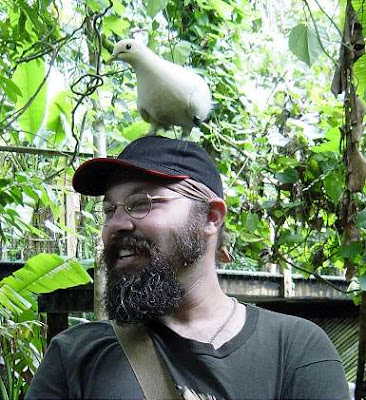 Here's a photo of me with a bird on my head. Thankfully it didn't leave anything behind when it left. I was walking around in this rainforest habitat in the city of Lae when this dove flew over and landed on my head. He stayed there for a good 10 minutes while I walked around as if this sort of thing happens to me all the time. This photo was taken a couple of years ago. I only put it in here because it's a funny picture and now I know how to put photos in my blog, so that's exciting.
So Monday we came in to work and found the that the workshop guard dog was paralyzed in the hind legs. That was a real surprise, because I had seen him on Saturday and he was fine. We're not sure what has happened to him, but we suspect that he may have eaten a cane toad. Cane toads are these really big, fat toads that apparently like to live in sugar cane fields. Apparently if a dog eats one, the toxin in the skin will paralyze the dog's hind legs. Anyway, we have cane toads here and naturally they like to congregate under security lights at night and eat the bugs that fly around bumping into the light because they get confused and think they've found the moon or something.
Okay, so now we've got this pathetic dog, (his name is Lobo), who can't do his job guarding the shop and who now requires that we hand feed and water him. The question is, how long do we do this? If he were acting really sick, it would be easy to justify putting him out of his misery, but the problem is that he doesn't act sick at all--he just can't walk. His spirit is definitely willing, but his flesh just isn't cooperating. I guess we'll keep nursing him along for a few more days and see if he improves--today he managed to drag himself several yards, which is certainly better than he could do on Monday. So maybe there is hope for him yet?
We kept working on stocktake today--it looks like it will take us the rest of the week to get it all nailed down, but I have to say that it is really going pretty well, overall--I'm sure it was far more stressful last time we did it. Whenever we do stocktake, (which for me involves lots of time in the office in front of a computer inputting numbers), I realise that my normal job takes a lot out of me--during a normal week, I often come home tired and a little achey in a few joints from a long day and I just want to relax and vegitate for a while, but during the week of stocktake I find myself coming home with energy to spare.
Clare is still not feeling so hot, poor thing. If she's still unable to keep food down tomorrow she'll call the clinic again and see what they have to say.
Posted by Andrew the Mechanic at 10:23 PM