Okay, so here I am in the UK. Because I'm an American here on a tourist visa, I am not allowed to work for money, and even volunteer work could put me at risk of being told to go away, and furthermore could make life difficult for anybody who decided to employ me.

So I'm here, and some days I get a little bored. I'm a mechanic. Not just a mechanic who fixes thing for pay or for a good cause, I fix things because I have an innate need to fix things (cue the superhero theme background music). I fix things not too put food on the table, not to pad my wallet, not in hope of recognition or fame, but because I must. Keep your vile monies! I MUST FIX MACHINES!

So I was wandering around the place where we are staying, having run out of little mechanical things to fix around the house, and I came across a small pile of dilapidated bicycle parts. After a bit of a rummage, I realised that there were a lot of interesting parts around, and that with a little work, a ridable bicycle could probably be built. I started with this old Peugeot Esprit road bike frame, which I liked because it was huge and because it reminded me of an early 1900's bicycle: 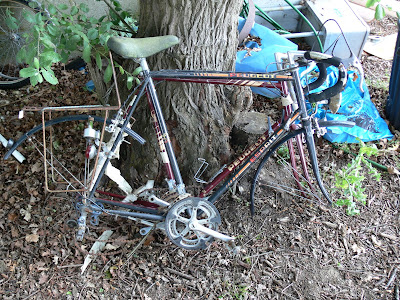 And this old Puch ladies bike. It had obviously been sitting outside unused for many years--there was a lot of rust, (the chain had a big spot that was rusted solid, for example), but there were some things I really liked about it, like the three speed rear hub and the drum brakes: 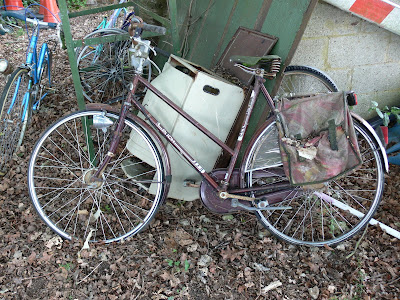 "Wait a minute!" I hear you saying, "Three speed hub and drum brakes?? Don't those date back to the early Iron Age?" Well, yes, such technology is more or less obsolescent, but it has two redeeming features: 1.) internal gear hubs and drum brakes are quite reliable, and 2.) they require very little maintenance.

Normally, I hate working on bicycles, because they tend to be loaded down with all kinds of fiddly little bits that are fragile and always seem to be in constant need of adjustment. I find bicycle caliper rim brakes to be a pain, and deraileurs to be a serious headache. In fact, these things have probably historically been among the biggest barriers to me ever owning a bicycle, (the fact that Ukarumpa is all steep hills doesn't help either).

So here was my chance to build up a bike that had none of the things I hate most about bicycles; how could I not build it? Naturally I didn't have any tools with me, but in the saddle bags of one of the dead bikes in the junkyard, I found a 10-way combination wrench/spanner, and that was enough to get me started. Over the next few days I collected a number of other tools, mostly really cheap junk, but hey, I don't know yet where to get good tools, and I'm not exactly swimming in cash.

So the Peugeot frame ended up with the wheels, control cables and levers from the Puch, as well as the handlebar grips. Other bits and pieces come from other bikes. The Puch also happened to have an old Brooks B66 leather cruiser saddle on it, (to buy it new would cost $150-$200 USD), so I snagged that as well. It was a bit moldy from sitting out in the weather for so many years, but it's still more comfy than what was on the Peugeot frame.

I knew I wanted a simple bike, and I knew that I wanted a sitting-up riding position, so with these goals in mind, I removed the mudguards/fenders, lights, luggage carrier, and brake calipers and those horrible deraileurs and all their associated controls from the Peugeot frame, and installed the drum brake wheels (which appear to have stainless steel rims!) and the Brooks saddle. The drive chain came off of one of the other bikes out in the junkyard. I couldn't figure out how to get the handlebars off, (the bolt that holds the stem in place is rusted up tight and I can't get it to move with the tools I have), so I just flipped them over and made do. I stuck the handlebar grips from the Puch onto the ends of the bars.

None of the tires in the junkyard were any good. The local supermarket had 20", 24", and 26" tires/tyres, but the Puch rims are 27", so I ended up having to order some new tyres on-line. The supplier accidentally sent me 26" tires, so while waiting for him to get his muddle sorted out, I went ahead and put a rotten old set of tyres on with new tubes, (mistake).

I wanted to be able to ride at night, so I put a headlight and tail light on it. I happened to have a rear wheel mounted dynamo/generator as well as a front wheel mounted generator/dynamo, so I went ahead and installed both of them, the rear one powers the rear light, the front one powers the headlight. Simple and reliable, no fragile wires running all over the frame.

Here's what it looks like today. I was out riding it last night and again today, but while I was stopped and talking to somebody, the rotten rear tire let go and the tube blew out, (sounded like a pistol shot, which oddly enough made me miss the days when I used to be able to go out and shoot in the backyard in Tennessee), so the rear tyre is flat in this photo: 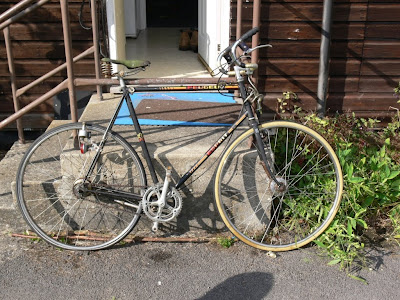 So now I'm gaining a bit of a reputation as a bicycle mechanic, but the truth is that I'm pretty much only interested in building things that are simple and reliable, which means that deraileurs anyway are pretty much out. I might be able to do something with rim brake calipers, but ugh! I still don't like them.

So I guess I'm a bit of a bicycle rider now. Worse things could have happened to me, I suppose. I haven't ridden very far yet, mainly because I didn't trust my tires, but once my new tyres and tubes get here and are installed, I look forward to riding farther.

I'm thinking of brush painting my bike all black to enhance it's "I found this in my great-grandad's barn" look.
Posted by Andrew the Mechanic at 3:08 AM