An Unexpected Move & How to be Large and Drive a Microcar 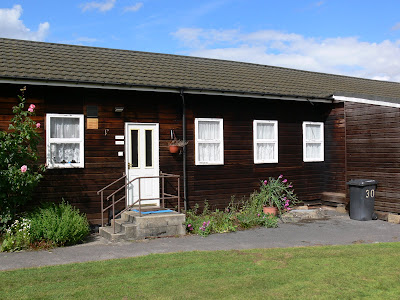 So, our first place here at the Wycliffe Centre at Horsely's Green was alright, we got the lights sorted out, we were adjusting to the weird fold out sofa bed, etc., the only fly in our ointment was the living room furniture--it was apparently designed for normal people rather than large men and heavily pregnant women, so we asked the housing folks if there was any chance of getting a either a.) a different bed so that we could use the fold-out one as a sofa in the living room, or b.) a larger and more comfy sofa. The next thing we knew, we were being moved out of the Fraser A flat and into the Moffat B flat! Moffat B is a bigger flat and is more comfy in some ways, though it lacks the high-ceilinged charm of the old flat. Anyway, we're happy. 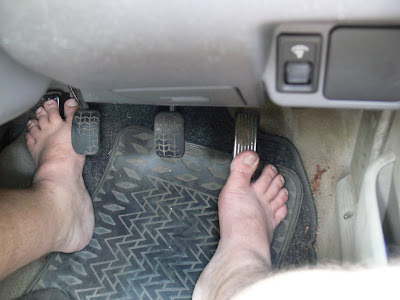 In other news, here's an illustration of how to Be Large and Drive a Microcar. Yes, according to Wikipedia, the Mazda Demio is considered a micro-car, so that explains why I have to drive with the sunroof open so that I don't bump my head on the roof. Truthfully, I only bumped my head on the roof for the first couple of days, then I found a knob on the side of the seat that adjusted the seat height. Naturally, I adjusted the seat height all the way down and got myself some headroom, though I lost some legroom. To compensate for the loss of legroom, I switched to driving MK style, (a style I prefer anyway), barefoot, right big toe controlling the throttle. NOW we're getting somewhere! I admit it, I am becoming a little fond of the old Demio. It is surprising how much stuff can be crammed into this car, though the rear suspension becomes overwhelmed fairly quickly and then the car feels all squirrelly on the motorway.

This is only the second car I have ever had that had a sunroof, and the first one I ever had we bought just the day before we left the US a couple of weeks ago, (there just happens to be one on the old Explorer we bought). Sunroofs are great!

Meanwhile, back at the ranch, the reports from Ukarumpa continue to be encouraging! It seems as if maybe the local criminal element really has experienced a change of heart. We have seen photos of huge amounts of food that have been given to our co-workers there as an expression of apology for the past several years of stealing. Here's hoping that we can go into the future as good neighbors in the Aiyura Valley, with a mutual respect and understanding for each other.
Posted by Andrew the Mechanic at 1:42 AM