Back in the Green and Pleasant Land

So we landed in England a few days ago. Our flight from the US was delayed by two or three hours as the plane was struck by lightning on its way to the US and needed to be carefully inspected before it could be cleared to fly back to the UK. So we had some extra time to say our tearful good-byes to my folks before leaving.

Anyway, we landed at Gatwick and were met by Clare's parents, who were excited to see us, especially Levi, who they haven't seen since they met us in Australia in October of 2010 for a short holiday.

Jet lag wasn't quite as bad this time, it's only a 5 hour time difference from the Eastern US.

For the first couple of days we stayed with Clare's folks in their house. Dad gave us a car to use for the time we are in the UK: 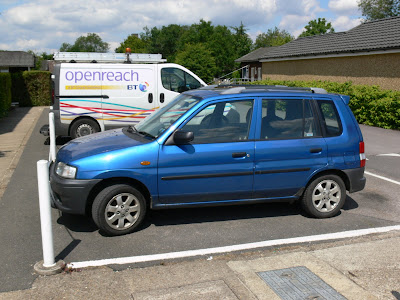 After leaving the in-laws, we moved to the Wycliffe UK headquarters at Horsley's Green near High Wycombe. Here's what the front of our flat looks like: 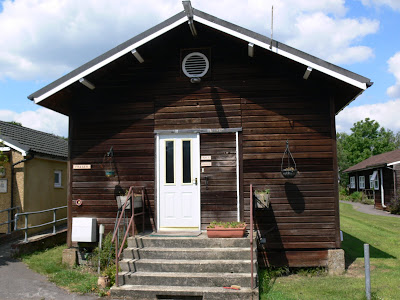 History buff that I am, I asked about the history of this building and was told that it was one of several originally built here in 1940 as a place for Londoners to send their children to during the Blitz, (like some of you, I immediately thought of the Pevensey kids from The Lion, The Witch, and the Wardrobe!) After the war it was turned into a what would probably be called a "juvenile detention center" in the US (!) so the place has had a colorful history even before Wycliffe acquired it.

Our flat is old, but reasonably comfortable. I like the high ceilings and I was pleased to see how many radiators there are scattered around the place, as we will still be here when it starts to turn cold outside. There seems to be a problem with the wiring as only one of the lights works, but when we told the maintenance people about it, they immediately came over and started working on it. Unfortunately, even though they were here until after 10 pm they weren't able to fix it, though lots of progress was made determining where the problem ISN'T! :) Anyway, they got us some nice lamps to use in the meantime, so all's well.

We have lots to do here in the UK, including having a baby! I think that I am actually glad that my visa won't allow me to do any work here, (including volunteer work).

Meanwhile, back in Ukarumpa, we are getting some very encouraging reports about the security situation there--apparently a group of people who have been directly responsible for much of the criminal activity in our area have decided to turn from their old ways. They have issued a very impressive apology to those who they have wronged, including a huge gift of garden food! Perhaps the tide has turned and we are at the beginning of a time of greater peace? Only time will tell, but the outlook seems promising to me right now.
Posted by Andrew the Mechanic at 9:06 PM