Okay, so it's been a while.  My thinking, back in the first half of 2020, was to wait until the pandemic was over and then write up a little report on "how we survived the pandemic in our neighborhood".  But alas!  Stupid pandemic won't go away.

I'm biting my tongue firmly, staying away from the politics on this.  Do I have opinions?  Certainly!  Quite strong ones, and those who know me well can guess which way they probably lie.  But I'll steer clear, there's way too much politics going on out there.

Well, in March, I believe it was, there was of course the obligatory lockdown.  All our employees were sent home and all our departments were closed.  We bent over backwards (financially) to continue paying our employees at least part of their pay for as long as we could.

None of us knew what was going to happen next.  There was speculation that we would all end up leaving one way or another.  Or that there never be a way to leave at all.  Some people were highly stressed, others adopted a wait-and-see attitude.  Since everything was shut down and I couldn't get parts, I turned to a long term project that I had been sitting on for a while and built this: 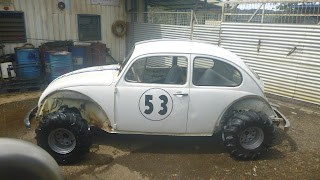 New floors, new heater channels, ATV wheels and tires, it was by far the biggest car project I had ever attempted and I learned a ton.  In this picture it's not even done yet, it eventually ended up with a fiberglass "Baja" kit (new fenders, trunk lid, etc.)  Fortunately/unfortunately we opened back up again before I was finished with it and so it's still not quite done...

The car itself is a 1969 VW (australian market model) that had been given to me by a friend who left some time ago.  I had grand plans of making it into a car for my wife to drive since her old Mitsubishi bus was out of comission, but other events transpired which made that unnecessary.  I'll get into that in another post.

So as I say, we finally re-opened and things returned more or less to normal.  Hard times hit the Auto Shop and we lost first one manager, then another and I once again found myself managing my department, a job which I really do not like for various reasons.

So yeah, things are more or less normal for us again now.  Our local store is still requiring masks, but that's just about the only place locally that is still doing that.  If you go to the city of Lae you pretty much have to wear masks any time you go into a store, but not restaurants.  Some of my Papua New Guinean friends have sat down with me and asked me what the big deal is, since most people here who have gotten the virus seem to just get better again.  Certainly tuberculosis and even pneumonia, (both fairly common here) kill a lot more people.  And that kind of made me think: culturally, PNGians are much more used to death than people are in a lot of other countries.  There are lots of reasons for this that I don't really want to get into here, but it's true.  And a disease which kills so few of those who get it just doesn't seem like a big deal here.

For us here in the workshop, the biggest headache has been shipping!  Stuff that used to reliably take a month or 6 weeks to get here from overseas now takes much long--6 months is not unusual!  And it doesn't seem to matter what method you use for shipping, it all is taking forever, though there are some signs that things may be starting to improve, thankfully.

Posted by Andrew the Mechanic at 5:22 PM