So you may remember that some time ago I tried to resurrect a dead 1987 Honda XL250R by stuffing a Honda CB/CMX250 Rebel engine into it.  The essential problem was that I had a complete '87 XL250R sitting in my shop.  It was in fine condition except for the cylinder head, which was cracked, and finding uncracked replacements is very nearly impossible these days.  If you want to know more about why I didn't pick any of the more obvious solutions, (cylinder head off of a newer model XR, for example), you'll just have to go find the other post.

So!  A high school kid from the community was wanting some exposure to the wild and wooly world of motorcycle maintenance and he just happened to have been given a 1984 Honda XL250R in very nice condition, but with--you guessed it--a cracked cylinder head.  We decided to jump in the deep end of the motorcycle mechanic pool by repowering his XL.

I'll admit here that I haven't been too happy with how the Rebel powere XL turned out.   The engine didn't have nearly as much power as I felt it should and the lady who owns it only got to ride it for a couple weeks before it broke again.  I haven't started tearing into it to find out what the problem is yet, but so far the Rebel engine is not really impressing me.

So this time we decided to try using a chinese Honda clone engine.  Before you flee this page in disgust, hear me out:

The engine we used is a Zongshen CG200 engine.  The design of these is based on the Honda CG125 engine.  Honda, I have read, designed the CG125 after complaints from South American dealers about the relatively high failure rate of the overhead cam CB125 engine.  Apparently, Honda sent people to South Ameica to see why the CB/SL/XL 125 engines were failing so badly in that market when they seemed to work so well everywhere else.  What they found was that in the South American markets the little OHC engine was failing primarily due to constant overloading and neglect.  In short, The CB 125 was a mini race horse in a market that really needed mini donkeys and mini mules. 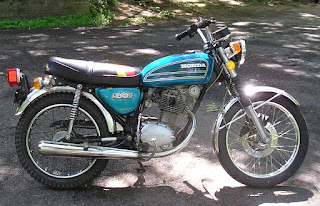 Back home in Japan they designed a simpler engine to cope with the kind use/abuse they had observed in South America.  They did away with the overhead camshaft which had been especially prone to (catastrophic) failure due to low oil level or dirty oil.  Instead, they mounted the camshaft down low, and used gears to dive it off of the crankshaft.  An interesting, low tech, single lobe camshaft and rocking lifter arrangement was used along with pushrods and conventional rocker arms (mounted on the cylinder head), to operate the valves.  The gear drive to the camshaft did away with the camchain/timing chain of the overhead cam engine, which was a component that had needed regular adjustment and occaisional replacement.  The rest of the engine, (bottom end lubrication system, clutch, transmission), remained virtually unchanged from the original CB125 engine.  The new engine entered the market in a motorcycle that looked very much like the CB125, the CG125. 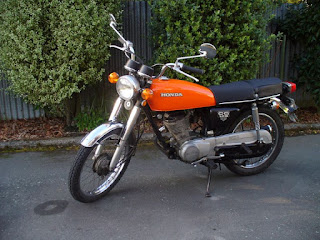 My personal experience with the engine starts with a collection of 3 wheeled chinese trucks that my department manager bought cheap at an auction in Lae quite a few years ago.  These were basically overbuilt motorcycles in the front with a small pick-up bed on the back, somewhat like a tuk-tuk.  They were all powered by chinese made 200cc variations of the original Honda CG125 engine. 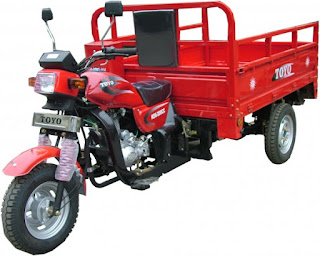 this is what I keep referring to as a "three wheeled truck".  The ones we had put up with a lot of abuse and neglect before we finally retired them for safety reasons.

So I greeted this little fleet of 200cc cargo carriers with a healthy dose of skepticism.  I really thought that they were going to prove to be a total waste of our time, but I have to admit that they held up better and proved to be more useful than I would ever have guessed.  After several years of daily use and abuse, they were finally retired, but more for safety reasons than for any other reason.   We tried selling a few of them, but nobody seemed interested in buying any of them and so we eventually just stripped them down for usable parts, including the engines.

The pick-up truck variation of the engine has a transmission that is geared lower than a motorcycle transmission usually would be. In fact, in the trucks, I once discovered--by way of experimentation--that on level ground it was easily possible to start from a dead stop in all 5 gears!

So anyway.  Me and the customer took one of the ex-three wheeler engines and tore it down, replacing those parts that needed replacing (not many!), and then proceeded to put it into his XL250R frame.  This has got to be one of the most riduculously easy repowers that you can do.  2 of the motor mounts almost line up without modification. 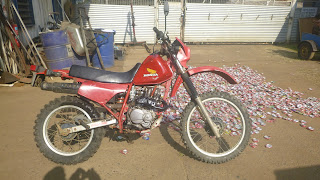 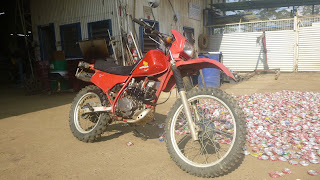 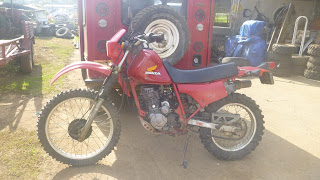 No, it's not any faster than the original XL was, but at least Samuel now has a working motorcycle that should be reasonably reliable, and, once we finsih hooking it up, will have electric start too, which the original XL250R did not.

Overall, I have to admit that I'm a lot happier with this bike than I am with the Rebel powered one.

Posted by Andrew the Mechanic at 3:03 PM