For Those Who Came In Late... Part II

"Okay great," I hear you say, "so now we have some idea of how you got to where you are, but we're still fuzzy on what you actually DO. From your blog it looks like you just live in the middle of nowhere and play around big army trucks and build motorcycles." (Hopefully my blog is a little more informative than that.)

But the question is a good one. What do we do in Ukarumpa, and why do we do it?

In simplest terms, I fix machines, primarily machines used by people who are translating the Bible in Papua New Guinea. There is a lot of Bible translation work to be done in Papua New Guinea Out of around 800 seperate languages on the Papua New Guinea side of the island, (yes, around 800, I don't think that anyone knows the exact number, as a lot of language survey work is still being done), anyway, out of those 800, there are some which will very likely never have the Bible in their own language, as they are dying out for various reasons. I could be wrong, but I think that translation work is currently being done in about 200 languages (by Wycliffe and other organisations combined), and there are still at least 300 languages where no translation work has even started yet.

Once upon a time, Bible translators working in remote locations needed very few machines. Usually all they needed was a way to get out to the place where they were working, and it usually took them 20-30 years to translate the New Testament. In many places, translators were (and still are) responsible for keeping local airstrips open, which mean that large, heavy duty lawnmowers were needed. In some countries, translators got involved in community development projects, (at the request of the people they were working with and with the blessing of the local government), and so other machines were needed, like pumps, chainsaws, small tractors, etc. Sometimes, a translator would come into an area where the people already had a few machines, and would often help the people to keep them running, (that is to say, he would ask people like me to come help him to keep them running!).

Then in the 1980's, computers came along and greatly sped up the work. Now, instead of writing all the information out on 3"x5" cards and keeping it all in shoe boxes, information could be stored on discs and accessed quickly and easily. At first, computers were kept in central locations within the countries where translators worked, as they were too fragile to travel into remote areas and too difficult to keep running in areas that had no electricity.

As time went on, computers became smaller and more portable and translators began to carry computers with them out to their language areas. Naturally, as there was no electricity to be had in many of these areas, small generators were needed. When utility ATV's were invented in the late 1980's, some translators started using them to get around on the trails in the rugged, roadless terrain where they were working. Some translators had already been using dirtbikes to get around, (I know one translator in PNG--recently retired--who wore out several bikes in the 50 years that he worked in PNG, starting with BSA and Matchless bikes before he got his first Honda in the early 1970's). All of these machines greatly sped up the work of Bible translation; the time it took to translate the New Testament was virtually cut in half.

But unfortunately, these machines also all required maintenance and repairs from time to time. And unfortunately for them, most translators are not good mechanics. Some of them are, but most of them have devoted their efforts to being good translators, (which requires a good chunk of brain wattage, by the way), and simply don't have the time to be constantly fiddling with broken machines.

So that's where I come in. Joe Translator brings his broken or ailing machines to me, (or he transports me to his language area by road, air, or sea), and I do what is needed to keep everything running. 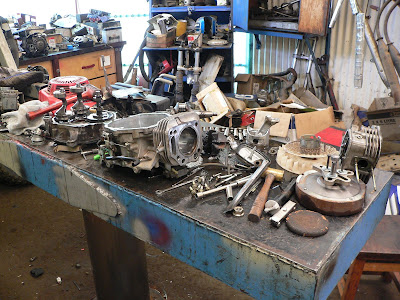 (a big Honda engine off of a large, heavy duty airstrip mower all apart on one of my workbenches. This one died from improper maintenance, but I was able to rebuild it. It worked well for several more years after this photo was taken.)

The obvious question that you should be asking right about now is: "why are YOU needed? Why can't JT just bring his machines to a local mechanic?" And that is a very logical question. The simple fact of the matter is that, in PNG anyway, there are very few good mechanics. It's not uncommon to see machines that are only a few years old already dead and decayed because nobody knew how to fix them. Good mechanics are few and far between in Papua New Guinea, and replacement parts for any machine are also very hard to come by.

So my job now becomes a little more complex than simply removing broken parts and installing new ones. I may find myself working on a Japanese motorcycle one day, a chinese throw-away generator the next day, a heavy duty German diesel engine on a pump the next day, an antique British diesel generator the next, a Swedish chainsaw later that day, an Indian copy of something British a week later, a Turkish or Egyptian copy of a Japanese generator after that, etc. You just never know what is going to get dragged into my shop, and getting parts for them can be a real challenge. Thankfully, we have decent internet access in Ukarumpa, so I am able to find a lot of things online. We have contacts in the US and in Australia who are able to buy parts on our behalf and ship them to us, which makes life a lot easier than it could be.

Sorry, I guess maybe I'm rambling a bit--I like my job and I like the unique challenges it presents me with (most of the time!) and it's easy for me to get lost in the minutiae when talking about it. 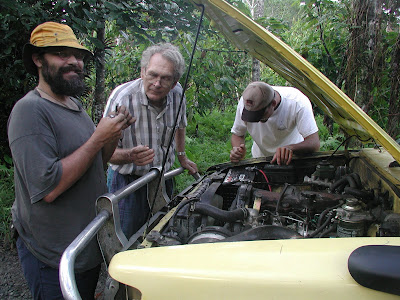 (in Bougainville with a translator and his at-that-time-future-son-in-law. We are figuring out why there was suddenly smoke rolling out from under the hood and are rigging up a new wire to replace a burned one.)

Posted by Andrew the Mechanic at 3:43 AM

Thanks for your work! May I share your story?

With a name like "wycliffeusa", yes of course you can share it! LOL. If you are thinking of using it in any publication, I'd appreciate knowing about it, but you're welcome to use anything you find on my blog.

Andrew, I love hearing about your work and the backstory between when I last saw you (you and Chris H. came to visit me in Wheaton about the time I was becoming a feminist democrat, and I haven't see you since) and now. Congratulations on the baby on the way, by the way! Very happy for you.

Thanks, Elizabeth! Baby #2 is due at the end of this month, but I guess it could really come at any time. We still don't know if it's a boy or a girl, though we did make an effort to find out last time we had an ultrasound, but baby's big feet were in the way.

It has been a long time, hasn't it? We were kicking around the idea of visiting other friends in upstate NY, but with gas prices as high as they are, I don't think we'll be able to swing it. Otherwise, I'd be tempted to stop by and we could meet each others families. (At least, I think you're somewhere in NY...)