So we're off to the UK again in a couple of months.   And once again it's to have another baby!   Number 3 is due in early December.

Last time we were in England (2011), I had a hard time because I wasn't allowed to work (wrong kind of visa), and it's hard for me not to have some sort of machine to fiddle with.  I got desperate last time and even went so far as to dig bicycles out of rubbish tips in an effort to build my own "custom" bicycle.  The resulting bicycle was moderately cool; it had drum brakes and a three speed hub, both of which were things I had never had on a bicycle before (bear in mind that the last bicycle I had was a single speed, coaster braked, Schwinn Scrambler when I was 11). but without the magic of internal combustion, it was not as much fun for me.  Plus I put the wrong sized tires on it, so it was hard to pedal (I'll fix that this time, though).

But this time will be different.  My loving wife, who could not bear to see me so miserable again, gave me her blessing to buy this: 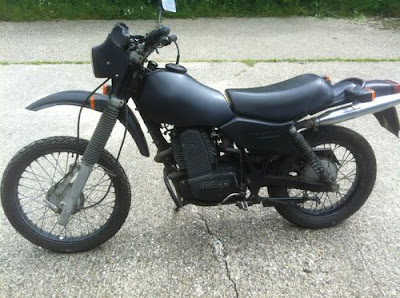 It's a 1986 Armstrong MT500, ex army bike!  I've been wanting one of these for years, so I'm excited about it.  It ticks all the right boxes for me, it's a little unusual, it's different from any bike I've owned before, it's a street legal dirt bike, it's black, and the MT's have a reputation for being hard to break and easy to fix.  It's got the legendary air-cooled Rotax 4 stroke, and parts are still easy to get for it.  So yeah, I'm happy.

I even bought some tools to work on it with and have plans to maybe customise it just a little (like maybe a disc brake front end off of the later MT350, maybe different tyres, perhaps a different headlight and tail light/rear mudguard).  Hopefully I can figure out how to get it legally ridable and may even get a chance to pootle about a bit on it.  If not, well, worst case scenario is that it becomes another one of my long term projects, something to keep me busy whenever we are in England.  In the absolute worst case, I suppose I could sell it again when we leave, but I'm hoping it won't come to that. We shall see!
Posted by Andrew the Mechanic at 11:37 PM