And Now For Something Slightly Different


Thursday the phone rang on my desk.  I very rarely answer my phone at work, most of the time I just let it ring.  This is because I am already too busy at work to take on any more work and because I enjoy celebrating the freedom I have NOT to answer it.  It seems that not everybody is able to simply not answer a phone, but I am.   I refuse to be a slave to some box of wires and diodes that screams incessantly at me.  If the person on the other end were standing next to me and saw that I was busy, doubtless he'd wait for a more convenient time.  Phones allow us to be unaccountably rude, screaming at people electronically and demanding that they speak to us.   On the whole, I much prefer e-mail.

Call me and we'll talk about it.

"Hey, can we use the truck to move a big empty fuel tank from Aviation to the main centre?"
"Ummmm, well, how big is it?"
"30,000 litres."  He might as well have said "20 baths, a hin and two ephahs".  30,000 litres sounds big, but I really had no idea how big that might actually be.  I thought about it for a second, then decided that I could always drive there, decide it was too big and decide not to do it, and Aviation is only a few miles away, so...
"Yeah, we can do it."
"Great!  Do you want to drive or should we use one of our drivers?"   Hmmm.  Their truck driver tends to drive a little too fast for my tastes, and this sounds like a big, awkward load.
"I'll do it."
"Okay, see you around 9:00."

Next morning, around 8:50 or so, I fired up the truck and started letting it warm up.  I asked Ben, who is a fairly new guy, if he wanted to get checked out in the truck as it seemed like it might be a good opportunity for training more truck drivers. He said yes and hopped in.

At the Construction and Maintenance department we spoke with several different people who all had different ideas about how big the tank was.  One said 6 feet in diameter, another said 2.5 meters, another said something else.  Nobody seemed to be absolutely certain.  We threw a couple of tie down straps into the truck and off we went.

When we got there, this is what we found: 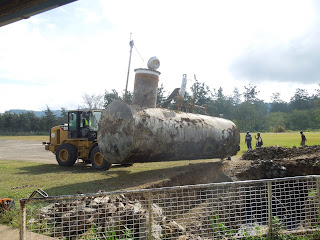 That tank is about 7 feet in diameter nad 23-24 feet long.  It also is pretty heavily constructed and weighs around 5 tons (!), and somehow nobody remembered to tell us that it had a bunch of pipes and stuff sticking out of the top of it that made it look like a small submarine.

Well, we decided to go ahead and give it a go--the loader was able to lift it, but it couldn't go high enough to lift the tank over the side without the loader's back wheels coming off the ground, so he lifted it up just higher than the bed and Ben and I backed the truck up under it.  Once in place, the loader operator lowered the tank on to the truck and we tied it down.  The loader had to keep the tank lifted up just a little bit or else it would have tipped out of the truck while we were trying to tie it down.

At first we had the tank tied down with heavy loading straps, using the original military tie-downs on the sides of the bed, but once we had it tied down that way, we weren't happy.  Right about then, Dave showed up in a pick-up truck with a bunch of chains in the back, so we used those and chained the tank down to the bed at the container twist-lock points--that made us feel much better about things. 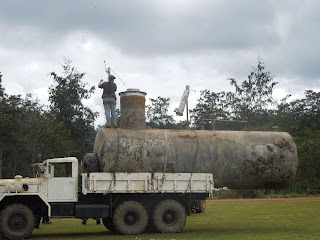 Loaded on to the back of the truck, from the ground to the top of the highest pipe sticking out of the tank is just over 21 feet.  So now we're taller than a double decker bus.   I don't remember what I was doing when this was taken--doubtless looking at that tall pipe and wondering if we were going to fit under the power lines.

Rather than try to drive out the main gate from Aviation, (which leads down a number of tight turns and under a bunch of low power lines, etc., we decided to drive straight down the airstrip and out a gate that we were told was down there.  I asked the Aviation director to get us a key for the gate, he decided to just go open it himself.  By the time we got to the end of the runway, (we were going pretty slow because the heavy load was a little unstable) the director and a couple of the employees had decided that the truck was too wide to fit through the gate and so they decided to just take down the fence instead.  Here I am driving through the fence: 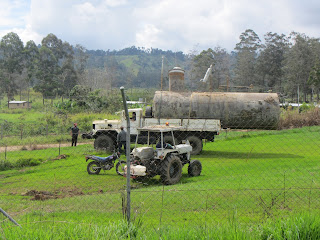 From there I was able to turn on to a better road with only a few power lines over it, all of which turned out to be high enough for us to drive under.

We made it to Ukarumpa without too much difficulty after that, though the entry gate had to be quickly modified in order for us to fit under it.  The load shifted quite a bit on the way, rolling a bit to the right.  Once back at Ukarumpa, the loader unloaded the tank.  In spite of our average return speed of 1 miles an hour, we beat the loader back and had to wait a few minutes for him to arrive.  Here we are, waiting for him to help us start unloading: 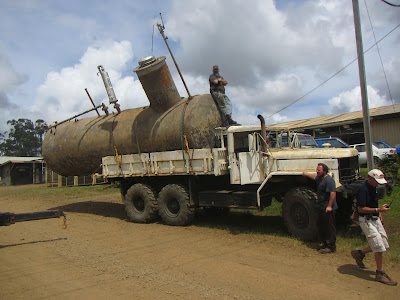 So!  All in all a successful move.  And the mighty Heavy Metal Thunder proves its usefulness once again.

In other news, I am way behind at work.  I'm having a lot of trouble keeping up with the load and it's starting to get me down--I'm tired of telling people "I'm sorry, but I don't have time for that." but it's true--I really don't have time for any more work--I think I'll be hard pressed to get the stuff that is in the shop done before we leave in October to go have a baby.  So if you know any motorcycle or small engine mechanics who might be interested in this weird life I live, send them my way!!!

Posted by Andrew the Mechanic at 9:05 PM

Good show, mate! I can relate to some of the crazy fun/new stuff you are doing.
Blessings,
Norm