Things That Make Me Go "Ugh!" 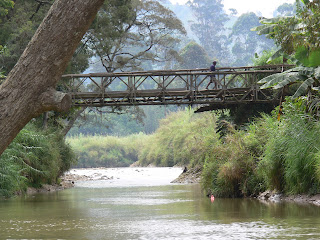 So if you are following things that are happening in this area in other blogs, you may already be familiar with the Saga of the Kingston Bridge in Kainantu, and can go look at other stuff.  For the rest of you:

What we locally refer to as the "Kingston Bridge" is a WWII style Bailey Bridge.  Nothing wrong with that, Bailey bridges are a good design; strong and fairly easily built,  They were designed to be erected while under fire in battlefield situations, but they were never really intended to be permanent structures.  According to at least one reliable source in the Aiyura Valley, the Kingston Bridge has been there since 1962, if not earlier.  I can tell you that int he 10 years that I have lived here, it has received very little maintenance, (cleaning, painting, that sort of thing), and as a result it is well and truly rusting away.  In many places you can use a stick to poke holes through what were once thick steel beams and girders.  Here's a typical example: 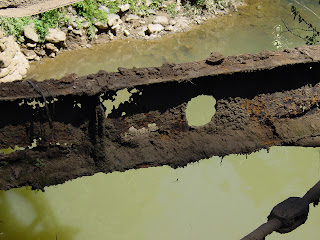 So what, right?  So there's an old bridge that should be replaced, big deal, right?  Yeah, actually it is kind of a big deal, as this bridge is part of the only way in and out for some major organisations in the Aiyura Valley, including, but not limited to: the National Agricultural Research Institute, Aiyura National High School, the Coffee Reasearch Institute, the Summer Institute of Linguistics main translation centre at Ukarumpa,  and Colbrans Coffeelands, just to name a few.  All of these organisations rely heavily on the Kingston Bridge, and in fact several of them need there to be a good bridge in place in order to get heavy trucks in and out of the area.

We have tried to come up with various solutions to the bridge problem, including the idea of building a ford, but local landowners are very careful with their land and have proven to be difficult to work with.  They are also part of the reason why a new bridge has not been built yet.

In other news, I am taking on more and more managerial duties at the workshop.  Part of me doesn't mind too much, as management needs to happen and I don't have a problem making decisions when they need to be made, but part of me hates it, because there's still nobody else here to do the work I came here to do, (motorcycles/small engines), and so while I am being assistant manager of the workshop, motorcycle and small engine jobs pile up.  Also being a mangerial assistant means that I get lots more phone calls and have to deal with the public more often than I used to, which means lots of interruptions during the day, which means that a 20 minute job can end up taking 3 or 4 hours.  So that makes me go, "ugh. Management."

Ugh. Can I end this on a brighter note?  Hmmmm.  Heidi's 8th tooth is finally coming in!  After months of having only 7 teeth,  the missing number 8 is finally showing up, so that's nice.  Oh, I've lost 75 lbs. now since January, that's nice, too.  My goal is to lose at least 100 lbs., possibly more, we'll see how it goes.  I owe a lot of credit to my lovely wife, who has managed to come up with a PNG adaptation of the South Beach diet.  Thanks, dear!


Posted by Andrew the Mechanic at 9:59 PM

now that I've left, you are pretty much the only source I'm prepared to read on all things in the Ukarumpa-zone. Thanks for the update... keep em coming...

I am sure the South Asian PNG diet that Clair has you on would be a big seller. You should market that.

At least I'm light enough to cross the bridge without fear now...