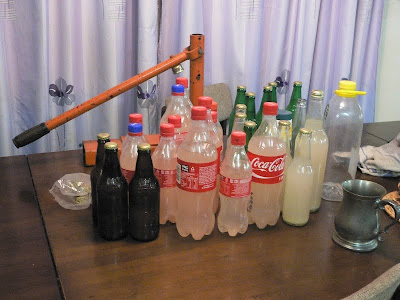 Okay, so I arrived in PNG with certain presuppositions. Among them was the idea that I might find a local soft drink to adopt as my new favorite. Sure, it's silly, but as a kid in Bolivia my favorite drink was an apple flavoured drink called Brahma, and in Peru of course my favorite drink was el Sabor Nacional, Inca Kola. So I just assumed that in PNG I would find something similar. But alas, it was not to be. I tried the local Fanta varieties, lemon and pineapple, but neither one really impressed me. Eventually I resigned myself to the fact that all there was to be had here were the usual hum-drum things that can be found anywhere on the planet, namely Coke, Sprite, and Fanta. There are a few other things, like Scweppe's Orange-mango, which is pretty nice, but there is nothing that is uniquely Papua New Guinean.

What I found was a wide variety of flavour and quality. Some people made their ginger beer really spicy, others made it so that you could hardly tell there was any ginger in it at all. The rhubarb brew was the same way.

So thus began my own experiments with rhubarb beer. I eventually got to where I could make a pretty good batch of the stuff, it was popular at friendly get togethers, etc. (I feel I should clarify at this point that although we refer to this stuff as "beer" in truth the alcohol content is immeasurably small), but it was a lot of work, and the recipe I was using took 3 or 4 weeks to make.

Okay, so a little over a year ago, Clare decided that she wanted a hobby, so she decided to get into brewing ginger beer on a regular basis. She got a recipe from another family and changed it slightly, using me as her guinea pig. Eventually she settled on a recipe that used a lot more ginger than the recipe she started with, giving her ginger beer a reputation for spiciness.

And so I finally got my uniquely Ukarumpian soft drink. Ginger grows very well here and is always available, so Clare is able to make a batch of the stuff every week. She bottles it in washed out plastic Coke bottles and old glass root beer bottles that we got from a family that left some time ago. The glass bottles we got came with a home-made bottle capper and about 1,000 new bottle caps. The photo shows the batch that she just bottled today. We don't really drink 12 liters of ginger beer a week, Clare has started selling several liters a week to people in the community, mainly so that she will have a little bit of spending money when we go to Australia later this year on holiday with her parents.

Koens Ginger Beer, (KGB). Especially popular with one of our Finnish co-workers.
Posted by Andrew the Mechanic at 7:49 PM

Sorry, I forgot to mention the fact that the bottles tend to explode if not refrigerated. That might cause some excitement in transit!