Of Tuk Tuks and Zongers

So when Clare and I got back from furlough last time, I discovered that the manager of the Auto Shop had bought 15 chinese motorcycles at an auction. He had gotten them cheap because they were new old stock items that had been imported by a company in Lae and they had been sitting outdoors for some time. Many of them were missing bits and pieces, but the whole lot came with several boxes of spare parts.

To be more specific, only 2 of the 15 were really motorcycles; the rest were these half motorcycle/half pick-up truck things: 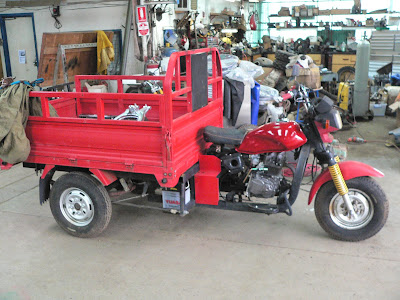 About half of the ones we got were water-cooled and have simple roofs over the driver's area. These went to various departments here in Ukarumpa. 3 went to the Industrial department, 2 to the Construction department, others I can't remember right now. The others we offered for sale to the community and they are slowly being sold.

The ones we have were all made by a Chinese company called "Zongshen". The engines are based on a Honda engine that I don't think was ever sold in the US, although I have seen them in South America. It is a well-proven design and should hold up fairly well unless they are made out of poor materials. They are simple, 200cc, 2 valve engines with pushrod valve actuation(!). Not terribly high performance, but unless they are abused, they should hold up alright. The ones currently in use by Industrial and Construction seem to be giving good service overall.

Although these vehicles are often mistaken for Tuk Tuks, they are really something different. It's true that they have three wheels like a Tuk Tuk, but that's about where the similarity ends. We have a couple of real Thai Tuk Tuks running around here as well, and they are much heavier duty machines. Where the Zongshens use a 200cc, single cylinder motorcycle engine and super lightweight drive shaft and rear axle, the Tuk Tuks actually use a small 2 cylinder (550cc) Diahatsu car engine, transmission and rear axle. They are also made out of much heavier materials everywhere else. There are many other areas where Tuk Tuks, although a much older design, are better machines.

So now you are one of the cognoscenti; next time you hear somebody refer to a Zonger as a Tuk Tuk, you can smile knowingly to yourself because you know the truth--it's not a Tuk Tuk, it's a Zonger.

I've still got three like the one pictured above for sale, but I really don't know if I'll be able to make them go; there have been just too many parts stripped off of them over the years that I don't have more of, like starter motors, for example. I suppose I could make one or two of them up as "kick-start only" propositions, but the kick starter on these things is more of an emergency back-up, and not really meant for full time use.
Posted by Andrew the Mechanic at 10:56 PM

Hi Andrew, thanks to Robert @ trupela tok, i found your interesting blog. Would you mind if i used some of your posts on my www.pngcars.com website and link back to yur great blog. I am enjoying reading your blog

Sure, you can use some of my posts on your site--I'll swing by and have a look, this is the first I've heard of www.pngcars.com.