Finally Home from the Hospital! 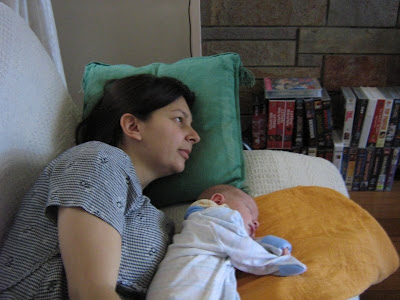 YAAAAY! My wife and son are finally home from the hospital! I thought we would never get out of there--apparently there were several other women and babies being discharged at the same time, so it took us over an hour to get permission to leave. This photo is of Clare lying on the sofa with Levi watching TV. It looks like Levi has already figured out that there is nothing on worth watching.

It's so good to have them back! By the end of their time in hospital, I was starting to really miss them, even though I was spending much of every day at the hospital with them.

I installed a baby seat in The Mighty Holden pick-up. That was a trick! I had to remove the whole back seat to find a place to mount one of the straps. I was warned that some hospitals here won't let you take your baby until they see receipts from a professional workshop for having your baby's car seat installed, but thankfully the Mercy Hospital wasn't that way. Many thanks to the folks who loaned us the car seat!

Levi is cute, I think I'll tell Clare that we can keep him.
Posted by Andrew the Mechanic at 3:42 PM