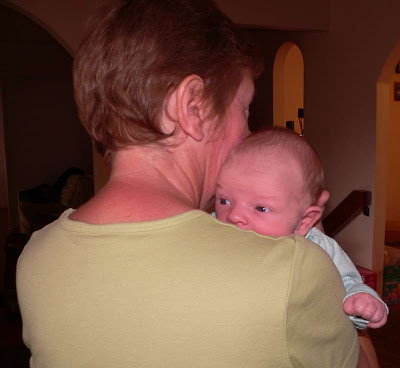 I may have forgotten to mention this, but Clare's parents are here for 3 weeks to see us and to get to know their first grandchild.

Incidentally, it's because Levi is the first grandchild on both sides of our family that he has 2 middle names. Because he is the first one, we chose to honour our dads by using both of their first names as his middle names. Hence, Levi, (his own name), Robert, (Clare's dad) Willem, (my dad) Koens. Levi Willem Robert was another option, but then there was the risk of him being nicknamed "Billy Bob" and I just couldn't handle that. Here's Levi with Clare's Mum. We haven't settled on whether she is to be called "Granny" or "Nana", but it'll be a while before Levi can speak, so I reckon we have time to think about it.

On a related subject, we took Levi into Melbourne today to the American Consulate. We were all ready with as much proof as we could find that I had spent over 4 years in the US over the age of 14, but in the end all I had to do was sign an affidavit that I had previously written describing where I was born, how many years I spent in the US before going to South America, where I lived in South America and how long I was there, where I lived in the US when I returned from South America, etc., etc. I was very glad that they accepted my affidavit, as I had a difficult time proving that I had actually lived in the US, even though I spent 10 years there before going to PNG.

Anyway, bottom line is that Levi was approved for his US passport and Social Security number. I have to admit that a part of me hated plugging my son into a government system at such a young age, but there you have it. It's certainly much easier to travel with passports and visa stamps and all that jazz. We finally gave up on trying to do the passport photo ourselves and had it done in a pharmacy not far from the US Consulate--naturally Levi was asleep when it was photo time, so we had to figure out how to wake him up, get him to open his eyes and look at the camera. I'm not sure how many photos the camera man ended up taking, but it was probably over 20. Wonder of wonders, we finally did get a pretty good one, if maybe a little bit grumpy looking. I'm glad that the cameraman had such a patient attitude about it all.

We also plan to get him his UK passport. I figure it's a good idea to get them both and thus try to give him as many options as possible for the future. Who knows what the future may hold for him?

So that was OUR day! The folks at the US Consulate were really nice, even though I had my usual trouble with the metal detector which resulted in me having to go through over and over again before I finally found a small pocket knife in my change pocket that I had completely forgotten about. (Unfortunately the net effect was that it looked as though I had tried repeatedly to sneak it in!) Thankfully the guard was very understanding and didn't give me a hard time. I refrained from telling her a story about my trip to the US consulate in Lima, Peru when I was 16 which resulted in me having to shed 6 knives (nothing illegal) at the metal detector....
Posted by Andrew the Mechanic at 9:07 PM