The Grand Furlough Experiment RV was a bust.  Didn't work out.  I never got the generator working (a blow to my personal professional pride, if I'm honest, I mean, it's just a small generator, I've repaired dozens of them before, why did this one stubbornly refuse to cooperate?).  In the end, I sold it for less than I had in it, which was less than ideal, especially as I had just put all new tires on it.

Chalk one up to experience, lesson learned.  In the end I did buy a car, I bought a 2007 Ford Crown Victoria Police Interceptor.  In it's former life it was a Raleigh, North Carolina police car.  It was cheap, it runs good, drives good, and I like it.  It's almost as good as the '89 Crown Vic cop car I used to have before I went to PNG.  In some ways it is better. 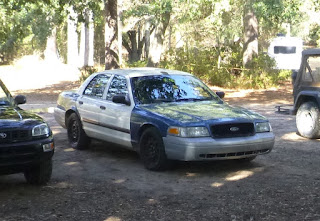 The whole family likes it.  I'm sure I'm permanently warping my kids' taste in cars, but I'm okay with that.  We parked it at a relative's place when we left and I expect we'll use it again next time we're stateside.

Speaking of that, yes, we are back in PNG now.  We've actually been back for several months and have gotten back into the normal swing of things.

Now, the real reason why I am writing this today:

Among the motorcycles that I work on here are a number of mid 1980's Honda XL250R's.  If you know these bikes, you likely know that although they are powered by single cylinder engines, they are equipped with dual carburetors.  In fact it would be more correct to think of them as a single 2 barrel carburetor, because that's how it works--at idle, only one carb is actually open, and as you add throttle the other begins to open.  The linkage between the two is arranged in such a way that when the first carb is about 1/3 to 1/2 open, the other starts to open and they both reach full open at the same time.  Very much like an old car equipped with a 4 barrel carb--low speed driving/riding is done using only half of the carb, but at higher speeds the whole carburetor is at work.  In theory, the system gives you all of the advantages of both a small and a large carburetor.

Why is this important?  Well, those old "dual carb" Hondas use a unique cylinder head.  Later, when Honda abandoned the progressive carb in favor of one big carb, they changed the cylinder head casting so that the 2 heads are not really interchangeable.  It is possible to bolt a single carb head onto an engine that was originally equipped with a dual carb head, but then you run into all kinds of problems when you try to put it back into a frame that was originally equipped with a dual carb engine.

Why is that important?  Well, all those old dual carb heads are cracking now.  It's true that the cylinder head is designed in such a way that there is very little material between the spark plug hole and the exhaust valves, (which is where they crack) but in Honda's defense, Honda probably never expected people to still be riding these bikes 30+ years after they were made.  Nevertheless, they are still good bikes and as long as the head isn't cracked, they are pretty easy to keep running.

Where am I going with this?  Well, over the years I have seen a number of XL250R's, (and a couple of '84-'85 XR250R's, which use the same cylinder head) retired simply because of cylinder head cracks.  Finding an uncracked head nowdays is extremely difficult--in fact when I go looking on eBay, 9 times out of 10 the heads being sold there are cracked ones.  I'm guessing that the sellers probably don't know any better, but if you know what to look for and if the seller has included a picture of the combustion chamber, it's easy to see.  One poor friend of mine here, while on a trip to the US, paid $300 for a head from a junkyard in California, carried it here in her suitcase, and gave it to me to use on her bike, only to have me tell her 30 seconds later that the new head was cracked as well.

Anyway, the upshot of all this is that there are a number of overwise perfectly good old bikes floating around here with unusable engines.  Some time ago I started wondering what other people around the world were doing with their old XL250R rolling chassis, so naturally I consulted the interweb.  I had a couple of ideas that I thought would probably work, but I wanted to know what other people were doing.

Imagine my surprise when I found that there are basically NO pictures of repowered XL250R's on the internet.  I guess I shouldn't be surprised, really--I mean, who would bother with a 30 year old dual sport bike?  Anyway, I mean to rectify that situation today.  Here is a series of pictures of 2 things that you can do to repower your XL250R:

Zongshen/Lifan engine.  This would be a super easy one to do.  I had an XL250R on my bench with no engine in it and so I experimentally dropped an old Zongshen 200 into it: 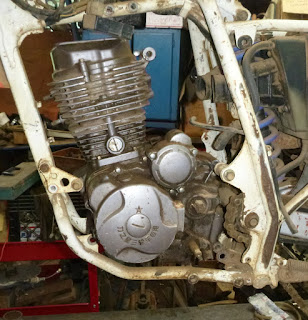 This would be a super easy mod to do--the front and rear upper motor mounts almost line up as is!  You'd probably have to line up the rear upper mount, then make up new mounts for all the others, at least that's the way I'd do it.  The downside of course, is that you'd be going down a fair amount in power, but if you're living in a place like PNG, where just getting the bike going again is the most important thing, you could certainly do a lot worse than a Zongshen or Lifan Honda CG clone.  You could even work out a way to hook up the electric start. 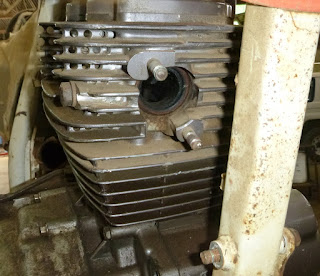 There is plenty of clearance for the exhaust pipe. 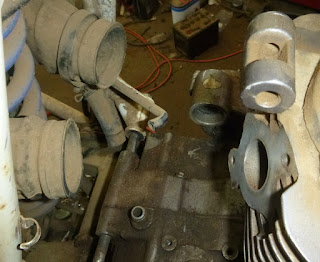 and the intake is even more or less pointed at one of the intakes to the original dual carbs!  It's almost like it was meant to be.  This would be a super easy repower. 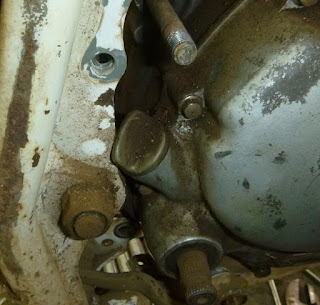 Access to the oil filler is not too good, but a bit of the frame (the flat part immediately above the swing arm pivot) could easily be cut away here without sacrificing too much strength.

And here is my OTHER idea, the one I'm somewhat excited about and I'll tell you why in a minute: 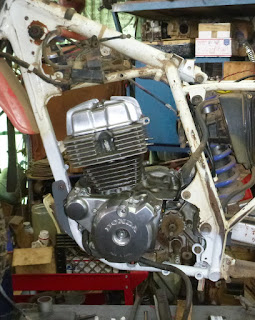 A Honda CMX250 "Rebel" engine.  Okay, so it's not the most obvious choice, but let me explain why I like it.  250 Rebels (and their ancestors, the CM185 and CM200 Twinstars) have been around since the late 1970's.  Engines are fairly cheap and easy to find.  This one I built out of parts of three motors, including all the kickstart mechanism of an old CM185, since the Rebels don't have kickstarters and I like any bike that is being used here to have a kickstarter, even if it's just a back-up for the electric start.  But Rebel parts are easy to get and there are millions of them out there.  If you are not familiar with the engines, they are 250cc twins and they have appeared in numerous Hondas around the world, such as the CA250 Benly, the CB250 Superdream, CB250 Nighthawk, CM250, CMX250, and possibly others I am forgetting.  On top of that, the chinese have copied it for various different bikes (and possibly ATV's?), so some really inexpensive parts are available out there if you don't mind buying chinese. 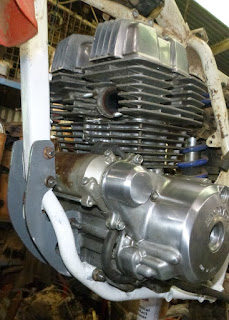 In this case, I made up some mounting plates that picked up the original XL250R front mounting points.  I was pretty happy with how these turned out.  The Rebel engine's front mounts are 3mm wider than the XL's frame mounts, and the way I mounted this engine, all of that 3mm ended up on the right side, which means that there is a 3mm thick shim between the frame and the mounting plate on that side.  I also had to relieve the frame a bit to clear the starter--this was probably the hardest part of the job so far, but I'm happy with how it turned out.  The starter motor in this picture came from the same CM185 engine as the kick start mechanism did, which means that it is a 6V starter.  I'm planning to just leave it in there and see how long it will last.  My 12V VW beetle had a 6V starter in it for years and it seemed to work just fine, naturally a 6V motorcycle starter isn't nearly as big as a 6V car starter, but we'll see how long it will last. 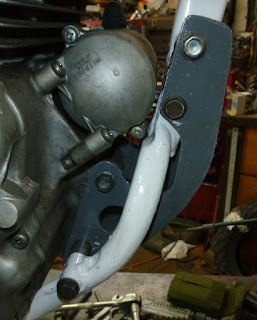 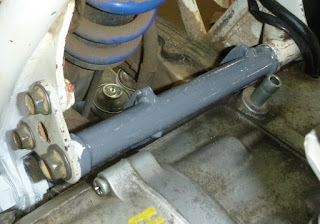 Here's the rear mount I made up--the gray part.  It bolts in where the original engine's upper rear mount went.  It has two tabs welded on to it that reach down and pick up the Rebel's upper rear engine mount.

Underneath, I found that the lower rear Rebel engine mount was the same width as the original XL250R, so all I had to do there was cut out the original mounts and make up new ones to weld onto the stubs of the old ones.

I still have not got the exhaust made up, but I don't anticipate any problems there.  I'm a little more apprehensive about the carburetor--rather than using the original Rebel single carb (it would run into the rear shock so I can't use it) I am going with a dual carb set-up such as is used on the European version of the CB250.  I'll let you know how it goes!

So there!  Now I've fixed a gaping hole in the internet.  Now thee are pics of what you can do with an old XL250R chassis.