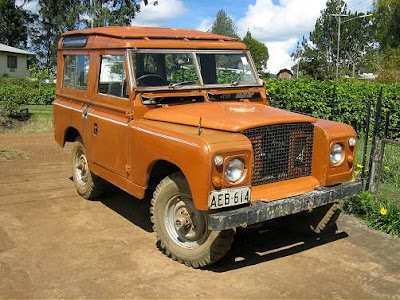 So I've been using the crank starter to start up Patrick the Land Rover lately.  Why?  Because the battery that is in it is now at least 6 years old and won't hold a charge anymore, and I can't afford the $150 pricetag of a new battery.  It's not that hard, the engine in it right now has a 7:1 compression ratio, so once you get it spinning, it's not too hard to keep it spinning until it fires up.  Anyway, here's the procedure, for anyone who wants to know:

2.) put the transmission into neutral (this is very important--if you don't do this, there's a chance you could run yourself over!)

3.) make sure the choke on.  I like to pump the accelerator a couple of times, too, just to get some fuel into the intake manifold.

4.) turn the front wheels all the way to the left--if you don't the steering dampener ends up being in the way of the crank handle.

6.) get the starting crank out from behind the seat, feed it into the hole in the bumper.  I usually have the hood/bonnet up when I do this, as I find it very difficult to get the crank lined up in the cam on the front of the engine's crankshaft unless I can actually look down on the operation from above.

7.)  start cranking in a clockwise direction.  Trying to crank the other way won't work, the cam on the front of the crankshaft will just kick out the starting crank.

Once the engine catches, the crank is automatically disengaged from the engine, so there's minimal danger of it flailing around and trying to kill you at 750-1000 rpm's.

Anyway, the fact that I am hesitant to spend the money on a new battery was on my mind when I had a chat with a buddy the other day about the price of gasoline/petrol.  It's up to about US $8.00/gallon here, and as we were discussing that, I suddenly said, "we're in the mnidst of a depression, man."  "You think so?"  "Sure, look around, no matter where you go, it seems like nobody has any money and the price of everything just keeps going up.  It reminds me of stories I've heard from people who lived through the Great Depression."  I don't think that he was quite convinced, and truth is, I don't know enough about economics to really have any idea what I'm talking about.

I admit that I do get something of a kick out of crank starting it.  There's just something manly feeling about using your hands to force a big old engine to run.  Crank starting an old Lister generator gives you a similar feeling.

Thankfully I don't usually have to drive very far, and the old XR 600 gets a lot better mileage than the Ancient Land Rover does.

Posted by Andrew the Mechanic at 9:28 PM