Ah, it's nice to be back in Australia. We left the US a few days ago and had a mad series of flights between Tampa, Florida and Brisbane, Australia. We were delayed by weather on our first flight, which meant that we missed our connecting flight in Atlanta, which meant that all of our subsequent flights were shuffled around and rearranged and what we ended up with was somewhat different from what we started with, and included what must be one of the longest commercial flights on Earth: Dallas, Texas to Brisbane in 15 hours and 15 minutes or so.

Anyway, these few days in Brisbane have been great, to me it feels like maybe only the second time we've really relaxed since we stopped in Hawaii after leaving PNG back in June. Today, however, we leave and fly back to PNG. We're planning to spend the night in Port Moresby, then tomorrow on back to Ukarumpa!

Here's a photo from the archives, me back when I was still single, riding a borrowed bike (US spec 1987 Honda XL600R) to Madang for Christmas holidays with friends back in 2004, (I think?). 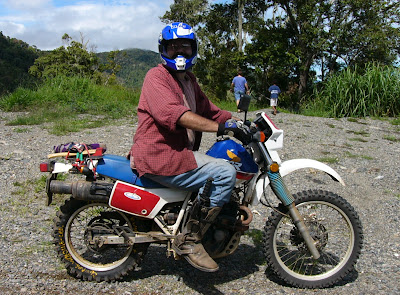 Posted by Andrew the Mechanic at 8:11 AM

I LOVE the knife strapped to your boot :)...