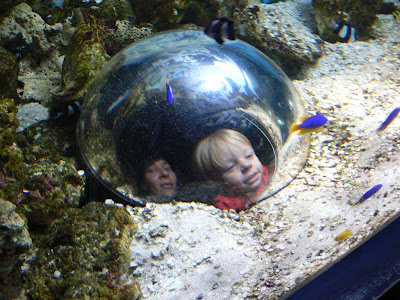 Well! Being on staff at POC was a lot of hard work. The campus where we hold the course is under constant attack from termites (I think they're white ants, actually), the elements (the sun, the heavy rains, the high heat and high humidity, and the salt air from the nearby ocean), and as a result needs constant maintenance. Overall, we enjoyed being there and having the opportunity to get to know the new people a bit.

So! The day that the POC course ended, (well, it's not ended quite yet, there's still a wekk to go, but right now all the students are spending a few weeks in villages near Madang, learning more about the trade language and cultures of PNG), so as soon as the students headed out to the village, we headed off to Brisbane to spend a couple of weeks there with Clare's folks. It has been great to spend time with them, and they are especially happy to have had a couple weeks with Levi, who is their first grandchild. Anyway, we haven't really been in Brisbane, we've been a ways north of Brisbane in the Sunshine Coast, in a beautiful place called Caloundra. After a couple of weeks here, I'm pretty sure that I can say that we would happily come here again! It's a child friendly place, with more playgrounds than you can shake a stick at, much to Levi's delight. Also not far away is the Australia Zoo, (of Steve Irwin, aka The Crocodile Hunter fame), as well as Underwater World, (where today's photo was taken), and the Buderim Ginger Factory, (more interesting than it sounds), and a place rather intriguingly called "The Big Pineapple", which, unfortunately was closed when we went there.

So, after 2 and a half weeks, our time here is finally drawing to a close. We leave here the day after tomorrow. I think that Clare and I needed this short break more than either of us realised, but I think that now we are both ready to go back to Ukarumpa, ready to get back to our respective jobs there.

I promise that I will talk more about POC another time.
Posted by Andrew the Mechanic at 8:21 PM

The experience you're doing with your wife will help many people, congratulations, it will be a pleasure to follow your blog