The Last Great Accumulators and The Pause That Refreshes 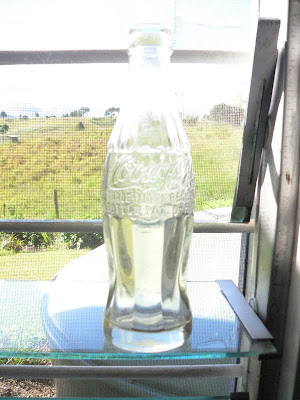 Early on in the history of this blog I decided not to post on Sundays. I hereby change my mind. These days it seems that Sunday afternoons, while The Boy is taking his nap and nothing else is demanding my time is the ideal time to jump on the interweb and post something to my blog. So there.

Yesterday Clare went to the Everything Sale. Every year the teens go around collecting whatever garage sale/flea market type junk they can from the community, put it all together in one big room, organise it, and then hold a huge garage sale. They do it to raise money for the Ukarumpa Teen Centre, which is a cool place dedicated solely to the teens of Ukarumpa. It had an indoor basketball court, a stage, a big room for Sunday morning Soul Purpose meetings, (like church, but infinitely cooler if you are between 14 and 19). Also for most Friday nights of the school term they put on a Hamburger Night for the local community, so it's also like the only restaurant in town.

So anyway, yesterday was the Everything Sale. I suppose it would be logical to ask how in the world it is possible that a group of missionaries would have anything to sell at a garage sale, but consider these facts: 1.) Ukarumpa has been here as a translation support centre since the late 1950's. In that time, thousands of people have passed through here, each of them bringing things with them that they left behind when they went back home. 2.) missionaries are terrific accumlators. We live a lot like people in the US did who survived the Depression; that is to say, most of us never throw away anything that might possibly one day be of slight use to somebody, and generally it doesn't cost us anything to keep junk. 3.) MK's are super at finding interesting stuff and dragging it home.

At the everything sale Clare picked up some toys, books, and videos for Levi, some old Dr. Who videos for me, and three old Coke bottles. She spent a grand total of 3 Kina, I think it was, which is just over 1 US dollar. Today I was looking over these Coke bottles. I had seen them on Friday when I happened to be at the Teen Centre for another reason and had noticed that they were in a box with a handful of WWII junk, (some aircraft part data plates and US army canteen dated 1943 with a big hole in it), but didn't realise until thinking about it later that they had probably all been recovered from the same place. Most likely they were all pulled out of a WWII US military base garbage dump by some MK. WWII garbage dumps are great--I could spend all day pulling interesting bits of junk out of one, and actually have done so, in fact. My favorite things to collect are bits and pieces of fighter planes.

So anyway, I started researching these Coke bottles and found that they are all dated 1944 and were originally shipped to US servicemen serving overseas in places like here. How cool is that?

Some may wonder about my interest in WWII objects. What can I say? Finding some little bit of junk that was actually used during that conflict somehow makes history become more alive for me. Finding WWII junk to look at is one of the perks of living here.
Posted by Andrew the Mechanic at 3:40 PM

We are friends of Sara Van Cott and must admit my husband is a man after your own heart when it comes to WWII stuff. He always jokes about Sara finding an old Zero he could restore,but was fascinated to hear of all the stuff at the everything sale. He is also a Mr. Fix-it and we spend "quality" time perusing the local auto junkyard for parts to keep our cars running. You sound like a kindred spirit! Thanks for sharing about what you do and how life in Ukarumpa is.
Karen H

Hi Karen, tell your husband that there are some interesting wrecks here to be seen--I have seen several Japanese planes, of various types, mostly Betty bombers, but also a Helen, a couple Sallys, some Zeros. I've also seen part of a B-17, parts of P-47's, P-38's, P-40's, P-39's, C-47's, B-25's, F4U's, also the odd Beaufort or Beaufighter. I wish we had junkyards here, but much to some people's chagrin I have to make my own junkyards! :)