WOW, it's been a long time! 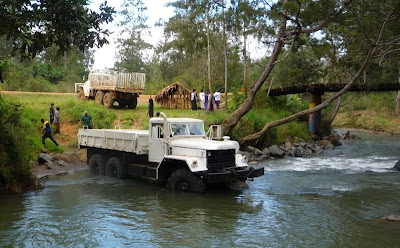 Okay, so it's been nearly 5 months since I added anything to my blog! I am filled with shame and self-loathing, but will probably soon recover.

So what have I been up to for 5 months? Quite a bit, actually--our 6x6, 5 ton, ex-marine truck finally arrived and we have had lots of fun figuring out what its capabilities are. In fact, here's a photo of me "stuck" in a river crossing during one of our first test drives. I say "stuck" because I wasn't really stuck, I only thought I was. Guess you could say that I was stuck in my mind. To be fair to myself, I did attempt to back out of the hole I was in, (actually I had managed to get the front axle grounded on a huge rock), and I couldn't. Later, however, after we had gotten a friend of ours with another big truck to come hook up to our truck with a chain to pull us out, I managed to simply back out without difficulty. I'm not exactly sure why it backed out so easily in the end, but at first I just had all 4 rear wheels churning up sand from the river bottom. (And yes, because this is an ex-USMC truck, it DOES have differential locks in the rear diffs, so all 4 wheels can actually be spinning at once. Apparently the Army trucks don't have this feature and are therefore puny and inferior.) In the background of the photo you can see the wooden bridge that I was trying to avoid driving our 12 ton truck over. After we got back out of the river, I drove over the wooden bridge without difficulty. On the way home, I drove over it again. Doesn't look the strongest, but apparently there is a truck bigger and heavier than ours that drives over it on a regular basis. In the background you can also see our neighbor's russian army truck that he was about to try pulling us out with.

Other things that have been keeping me busy: I put new tires (light truck mud tires!) on Clare's '81 Mitsubishi Galant then picked up another car like it to use for parts, (the previous owner was practically giving it away and it's actually quite a bit nicer than Clare's) and then picked up another car like mine to use for parts, (once again, the previous owner was practically giving it away), I sold one of my bike projects, (the NX250 engine in the XR250 chassis), finished and sold another bike project on behalf of one of the departments here, finally got started on a huge quasi-restoration job for a commercial customer who has patiently waited 5 years for me to get started on it (!), agreed to play the part of Lazar Wolf in the Ukarumpa Community Theatre's production of Fiddler on the Roof, agreed to become the "pointman" of the Quick Response Team, wrote a few newsletters, helped my friend Tim get his Volkswagen Kubel (Thing) running enough to get it to his house from where it had been sitting for a few years, (the throttle linkage needs some work so at one point I was steering and working the gearbox while Tim rode on the back bumper and moved the throttle by hand) and of course, the day to day business of keeping things running in support of the translation work going on here. I'm sure I've left a lot of stuff out, but I think you get the idea. Some of this stuff will be showing up in the blog over the next few weeks (I hope).
Posted by Andrew the Mechanic at 9:33 AM