Why I almost Never Turn Down Free Junk

A long time ago, shortly after I arrived here in 2002, I bought this: 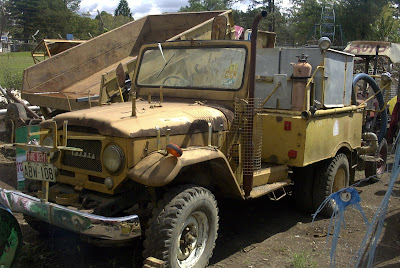 It was a circa 1965 Toyota Land Cruiser that had been made into a fire truck.  It had been used as a firetruck for many years, but then was replaced and was wasting away.  I paid the princely sum of USD $133 for it.  I removed the firefighting equipment and made it into this: 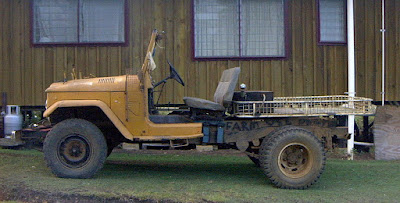 That was fun for a while, until I realised just how impractical an open top car really is in Ukarumpa.  Eventually I sold it to a Papua New Guinean friend of mine for something in the neighborhood of $70.  I didn't really have time for it or a place to store it and I really wanted him to have it.  It did not take him long to turn it into this: 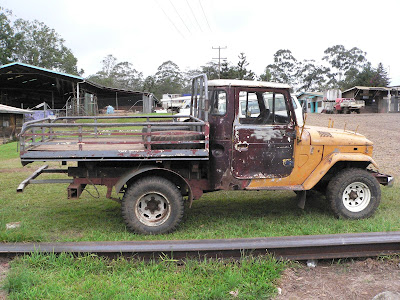 which got driven all over the place, including back and forth to Madang, which must have been an all day trip in that truck, which had a top speed of around 45 mph.  I was amazed at how well it held up.  Eventually, the new owner swapped out the petrol/gasoline engine for a diesel, and then left the faithful old petrol engine sitting in his backyard for a couple years.  One day he came by the shop and asked me if I wanted the original engine back, and if so, I was welcome to just come pick it up for free.  So together me and my friend Ben took a tractor out to his place, lifted up the engine and brought it back to the shop, where I used an old chinese three-wheeled truck to make up an engine stand for it: 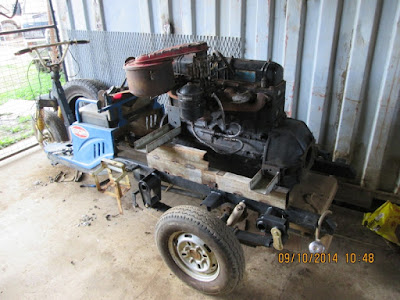 I was assured that it still ran, and sure enough, after a little bit of fiddling with the ignition system, it started right up and sounded really good.  So now I had a good running 1965 Land Cruiser engine without a home.  It sat on the engine stand for about 6 months or so.  And then something interesting happned--a missionary working near Goroka told a friend of mine that he had a "dead" Land Cruiser sitting on his property that he needed moved and that anyone who wanted it could have it just for the price of moving it off of his property.  He had no idea how long it had been sitting, but it had been a long time, there was a 20 foot tall tree growing through the frame in the back.  Well, my friend didn't want the truck, so I took it.  Now I had a good running Land Cruiser engine and a "dead" Land Cruiser.  Here's what it looked like when we got it back to Ukarumpa: 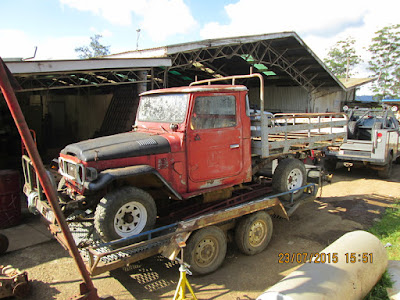 So!  without me even really looking for one, a classic Land Cruiser has fallen into my lap.  Yes, it does need quite a bit of work, but it's all stuff that I can do here.  I've never had a pick-up/ute here, and I am looking forward to getting this one going.  I hope to build it up to be good enough for road trips, as right now none of the cars we have is really suitable for that kind of thing.  Here it is after I've started cleaning it up.  In this shot the original engine has been pulled out, the seats removed and about 3 tons of mud cleaned out of the cab.  Because this truck sat for so long, it has dozens of peoples' names scratched into the paint.  I would like to preserve that graffiti if I can, just because some of it is interesting, some is funny, and a lot of it is cryptic in the way that PNG graffiti so often is: 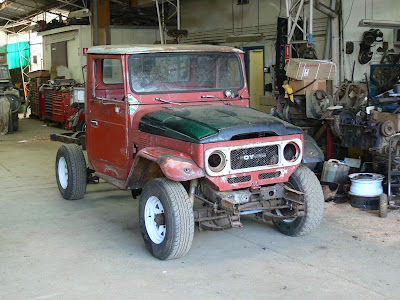 All for now!
Posted by Andrew the Mechanic at 10:52 PM