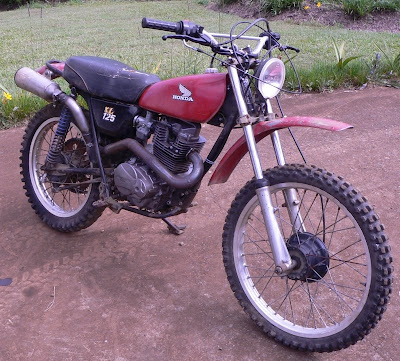 First, a Levi update: Levi is doing well. He often sleeps for 6 hours at a stretch at night. He is growing fast and is actually bigger than I was when I was his age. He generally seems to be a happy baby--he smiles a lot and is beginning to figure out how to laugh, which is fun. Clare took him to the clinic the other day to get his 2 month vaccinations and being jabbed with needles made him grumpy for the rest of that day and sleepy for the next couple of days. Overall, we are very happy with him.

So when we got back from Australia after Levi was born, I found that my department had bought 12 Chinese made 3 wheeled trucks and 2 Chinese motorcycles at an auction in Lae. Apparently we were the only bidders, so we got the whole lot for a song. The idea is to use them for department run-abouts on centre--certainly a cheaper solution than the Toyota Hilux and Hiace diesels that are currently being used. Anyway, they've all been sitting for some time in the salt air around Lae, so they all need some attention to get them running. Most of them are new with only 2 or 3 km showing on the odometers. They are all powered by 200cc engines, (the motorcycles are 125's), that are based on an old Honda design. I've known about the existence of these Chinese-made Honda derivatives for several years, but had never had a chance to see one up close. Among all the spare parts that we got with the lot of bikes and trikes were 2 engines that had come to bad ends, so I was thrilled to finally have the chance to pull them apart and see what there was to see inside of them. These particular engines were made by Zongshen, (affectionately known as "Zongers"), but as far as I can tell the ones made by Lifan, Jialing, Loncin, etc. are all very similar.

Other than a very unusual valve train that uses only one camshaft lobe to operate both valves, and a weird circular shift pattern, they were quite normal inside. I put one good engine together out of the parts and decided, (for the sake of scientific research) to put one into a 1975 Honda XL 125 chassis that I had laying around the shop. The idea here is to ride one around in a motorcycle chassis for a while and see if these Chinese engines would be a viable option for people who want to resurrect dead Hondas. 125-200cc Chinese Honda clones are almost always available on eBay, and I have often wondered if they were worth the USD$350 or so that they usually go for.

So far I'd have to say that they seem pretty good. The one in the bike pictured above had at least 3,500 km on it when it was taken apart, (I'm not sure why it was taken apart when we got it), and the rings still look new, nor is there any discernable wear on the cylinder walls. I really like the clutch in this motor--it's far better than the original Honda unit and has 6 springs instead of just four. I've only just started to ride this thing, but my initial impressions are better than I was expecting. Some research on the internet has shown that most of the troubles people have with Chinese bikes seem to be with the chassis and not with the engines. One thing I will say though, is that some parts are REALLY hard to find. For example, I have no trouble finding cylinder heads, carburetors, stators, flywheels and other parts that I will probably never have to replace, but trying to find a piston and rings for the 200cc engine has proven to be nearly impossible. Many of the parts in the engine can be replaced with original Honda parts, but the piston (a part that will have to be replaced every now and then), is an oddball--not like any Honda that I know of. So! That's my new challenge--to find a source of pistons to be able to keep these things going for a few years.

In other news, my wife sat me down tonight and told me that our trip to Australia for Levi's birth and the World Financial Crisis (which has effectively reduced the value of our income from the UK by about 25%) has knocked something of a hole in the boat of our finances and we need to start bailing in order to stay afloat. (Aren't metaphors grand?) I told her that I am planning to sell off a couple of my motorcycle projects this year, namely The World's Fastest (and only) NXR 250 and the Bush Bomber 280. Later she told me that she had made a mistake on her spreadsheet and that things weren't quite as dire as the had at first thought. But still a long way from rosy.

Ah, it's good to be back at work again.
Posted by Andrew the Mechanic at 9:33 PM 2 comments: