Never Had To Do This In Tennessee....

As you may remember, there are bridges in the area where we live that are in pretty bad shape. The government is working to restore/replace the worst of them, but it is a long process. Anyway, one bridge in the town of Kainantu is getting a little worse every time it rains, and right now is rainy season. Unfortunately, the bridge is part of a major road artery between the Aiyura Valley and the rest of the world.

So because the bridge is going to fall down "any day now", we're desperately trying to prepare by laying in whatever supplies we would normally haul in by truck. This morning I got to play truck driver again and took the ex-USMC M813A1 5 ton truck in to town to pick up 2 loads of fuel. My first load was 20 drums of fuel, my second load was 16 or so. This time we were bringing in petrol/gasoline and diesel to get our fuel station tanks filled up. This fuel is not just for our own use, we also sell it to the local public--there are a lot of trucks in the Aiyura Valley, and if the bridge falls down, ours will be the only fuel station that locals will be able to get to. (Actually, there is another place where cars can get across the river, but the bridge there isn't much better and isn't really suitable for heavy traffic. Plus the road over there is really rough.) 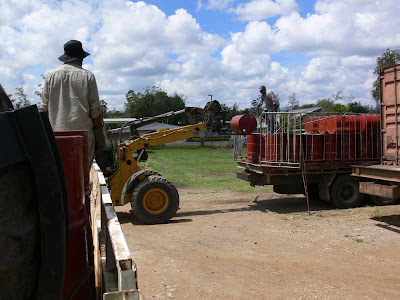 The fuel comes up from Lae in drums, about 50 or so on our road truck, then we take the 5 ton truck in, put as many drums on as it can hold, (about 20 or so), and drive back to Ukarumpa. This time I had to do 2 trips, as we wanted to get the road truck really light for crossing the bridge.

Here's a shot of the truck parked in the shop at the end of the day: 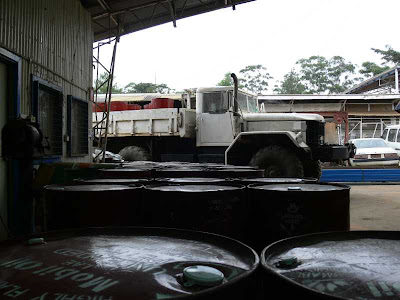 We're hoping to get in another load of diesel for our generators sometime soon, so I may be doing this again real soon.
Posted by Andrew the Mechanic at 11:34 PM No comments:

Back Into the Swing of Things

Well, we've been a month back in PNG now and you can hardly even tell that we were ever gone. Motorcycles, chainsaws, generators, big airstrip mowers, small lawnmowers, ATV's, and other small engine powered machines are pouring in and I'm beginning to feel like I need to slow them down again somehow.

Clare is adjusting to having two children in the house now, Levi is about 90% done with potty training, and Heidi continues to radiate good will towards all with her big smile. Here she is posing with our duffel bag, which got lost somewhere between Tampa, FL and Brisbane, AUS and arrived here just over 1 month after we did: 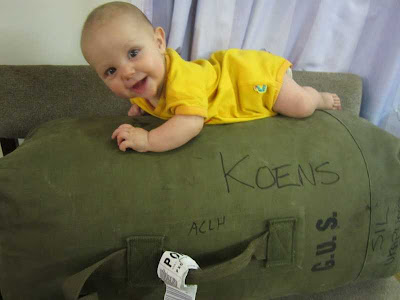 In other news, I offered to go pick up the Language Survey Team from an area they were surveying near Lae. I took a friend with me and we left a day early so that we could get some shopping done in Lae before picking up the survey team. We had a productive trip, we got very nearly all of the things we were looking for (which is surprising) and all was going well. On the morning that we were to pick up the team, we found that we had one last errand to do before we could go, so off we went to do it. We were headed to a business that niether of us had ever been to before and had only vague directions on how to get there. While trying to find it, this happened: 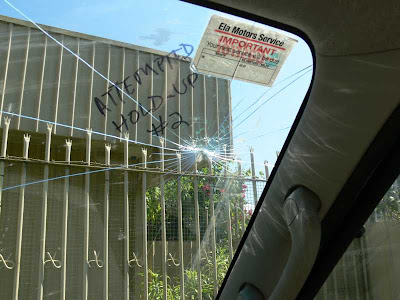 Yup! While slowly driving through a fairly busy neighborhood, a group of several men tried to hold us up. One ran out in front of us with a rusty old revolver and started waving it around, while another stood on the side of the road with a big slingshot. 1 or 2 more stood near him, waiting for us to stop so that they could rob us. I think that the one with the gun was supposed to distract us from the real danger, the man with the slingshot.

I long ago decided that in cases like this, nothing improves if you stop, so I mashed the throttle to the floor and held down the horn button to warn the man with the gun that he was in danger of being run over. Eventually he jumped out of the way, but not before his buddy with the slingshot managed to damage our windshield. I labelled it "Attempted Hold-up #2" as this is the second time that I have driven through an attempted hold-up in PNG. It's the third time I was in a car that somebody tried to hold-up, but only the second where I was the driver.

Thankfully, the whole thing was pretty much over in about 20 seconds and nobody was hurt. I was more annoyed than anything, especially as the insurance on our rental vehicle carries a $500 deductible that my passenger and I have to pay!

These things happen from time to time, and not just here.

In other news, my parents have sold my old Ford Ranger, which has featured a time or two in this blog. I'm a little sad, as I did rather like that truck, but also glad because now I have extra bills to pay, (like half of the $500 insurance deductible).
Posted by Andrew the Mechanic at 9:40 PM 3 comments: